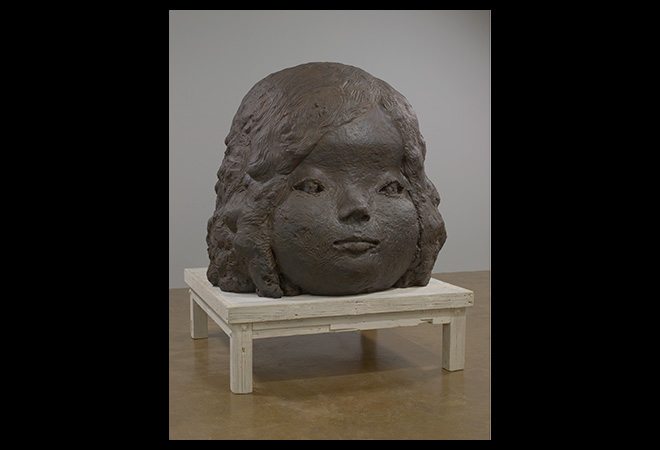 Japanese artist Yoshitomo Nara has brought his trademark paintings and drawings of cute, impossibly cool kids—most of them girls—to Culver City’s Blum and Poe gallery seven times since the mid-1990s. New in his current show, though, are eight heads sculpted in bronze, a medium we haven’t seen from Nara until now. While a few of these works are smaller in scale, it’s striking how massive most of them are.

Each of the eight figures has a distinctive personality. “Lucy” with her pudgy cheeks and pursed-lipped smile, is especially adorable. Her face is also five feet tall and almost as wide. Her companion, “Miss Tannen,” has what looks like a nearly seven-foot tall fir tree for hair. The uneven surfaces on almost all of these sculptures bear the physical traces of the hand-formed clay casts from which they were created.

The show also features the sort of manga-influenced paintings for which Nara is celebrated. Some of these images, such as “Hey! Ho! Let’s Go!” and “Guitar Girl,” feature characteristically rock-and-roll-obsessed tykes. Others, like “Blankey Jr.,” depict huge-eyed girls with the empty expressions of pre-pubescent zombies. (The one in “Midnight Vampire” even sports budding fangs.) While many of the works were painted on traditional canvas, others incorporate found signboards, shingles, and wooden panels as their support base.

The gallery’s second floor is devoted to a 30-year retrospective of approximately 200 drawings by Nara. These are arranged chronologically along an endearingly hand-scrawled timeline (presumably created by the artist himself). Here, again, are a succession of junior rockers and other free spirits, including a few social agitators in training. The cumulative impression is of a vibrant, exploratory youth culture that has broken free of, or at least remains gratifyingly oblivious to, the deadening influence of adult authority figures. While some of these rebellious kids wear angry expressions on their faces, they don’t appear inclined to violence. More than anything else, they just seem impatient at having to wait so long for their turn to take over the world.