Home Art Framed: Who Is That Masked Man? 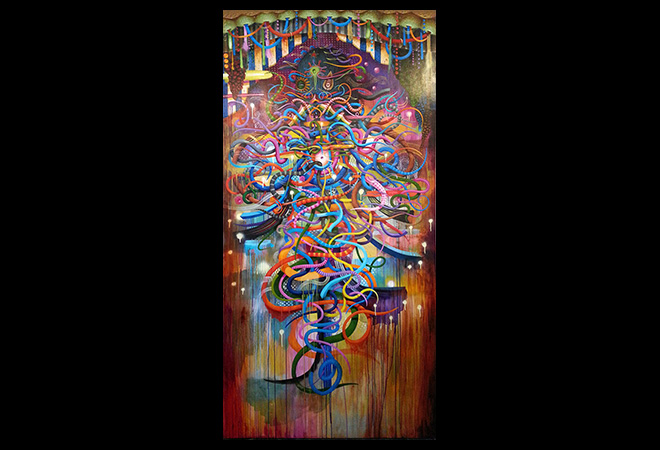 Obscured behind a swirling swarm of snakes and the tentacles of unidentified creatures, a masked or hooded figure peers out at us with a wary, lazy eye. Beads, baubles, and vines hover around his head, creating a celebratory aura that’s enhanced by streamers and banners hanging above. Tiny white, luminescent creatures seem to float gently toward the ground, and everywhere you look, the canvas is awash in color and light.

“Guey” (pronounced “way” and meaning, basically, “dude”), along with its companion painting, “Pinche,” are the twin centerpieces in Visual Cacophony, this month’s La Luz de Jesus show by south L.A. native and one-time graffiti artist Germs.  In both of these eight-foot-tall works, the placid heads of hidden or disembodied figures are garbed in lucha libre wrestling masks that are barely discernible amid—well, yes—the visual cacophony around them. Whatever party’s going on, these strong, invisible men seem unimpressed by the madness of the moment.

Six numbered paintings also on display in Visual Cacophony offer variations on these portrait images. Each one, from “Uno” to “Seis,” provides a closer, more detailed look at a smaller-scale scene similar to those depicted in “Guey” and “Pinche.” Here, the objects perched in the air look more like helmets than masks, with streams of colorful material hanging from them and rays of light beaming out at unknown targets.

All of these works are awfully fun to look at, with so many surreal details to keep discovering in each one, along with jarring elements (including nearly identical little white paint splashes at the same spot in each of the numbered paintings) that prevent the viewer from getting too complacent. “If something looks too nice and clean,” suggests Germs (a.k.a. Jaime Zacarias), “I have to destroy it and force it to do something different.”

Sharing the bill with Germs’s Visual Cacophony, Dave Lebow’s Weird Tales are paintings of grotesque monsters straight out of the kinds of nightmarish fantasies popularized in mid-20th-century sci-fi stories and horror matinees.

Visual Cacophony and Weird Tales are on view at La Luz deJesus through March 2.