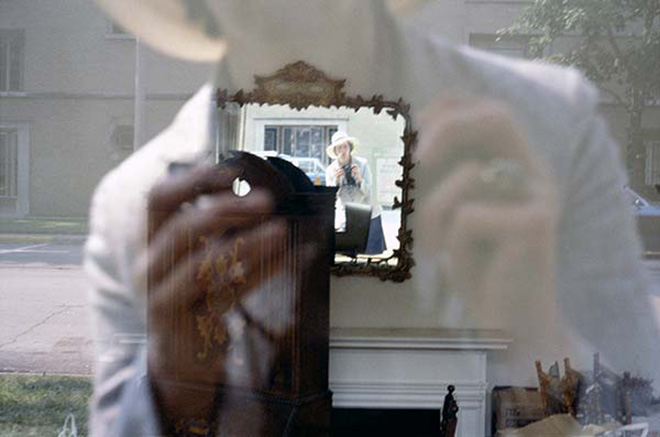 Vivian Maier was experimenting with photographic self-portraits several decades before digital “selfies” became the rage. In this 1979 picture, taken in Chicago, she achieves a remarkable effect by standing outside the ground floor of an apparently residential building and pointing the camera through a closed window at her own reflection on an interior wall mirror. The reflection in the intermediary window glass of the photographer and the streetscape behind her, which mimics but does not replicate the image in the mirror, appears superimposed over the scene inside the room, creating a first-glance false impression of the composition as a manipulated double exposure.

The current retrospective of Maier’s work at Merry Karnowsky Gallery includes some additional photos of Maier taking pictures of herself in mirrors, including a car mirror and the wall mirror of a beauty salon while she’s having her hair done. One especially intriguing shot captures the photographer’s reflection subsumed by a celebrity portrait of Marilyn Monroe among a row of identically sized posters of celebs like Joan Crawford, Clark Gable, and the Beatles. Other self-portraits reveal not the photographer herself but her shadow, cast ominously over a row of movie posters or the imagined evidence in a mock-crime scene.

The nine self-portraits on view in this show are also the only nine color prints included in the gallery’s massive display of more than 90 photos by the enigmatic Maier, who spent most of her life working as a nanny while shooting photos in her free time, unremunerated by either fame or fortune. The rest of the exhibition is comprised of the black and white street photos, taken in New York and Chicago, for which Maier is now receiving her due in enthusiastic posthumous consideration.