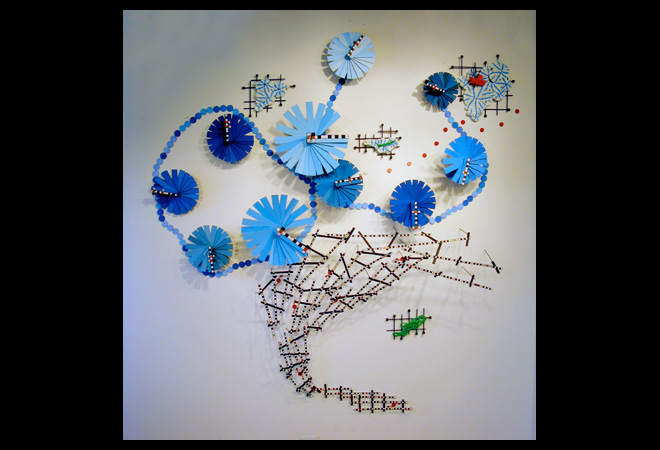 22 years ago last week, the confluence of two extreme weather events—the “Halloween” nor’easter, originating off the east coast of Canada, and Hurricane Grace, which had made its way north from Bermuda—created a devastating meteorological phenomenon that writer Sebastian Junger dubbed “the perfect storm.” As both the book and the movie recounted, the casualties of this enormous tempest included the Andrea Gail, a Gloucester, MA fishing vessel that was lost at sea along with its six-man crew. The last words heard from the ship’s captain, Billy Tyne, as the storm approached his boat were reportedly, “She’s comin’ on, boys, and she’s comin’ on strong!”

Before visitors to the Craft and Folk Art Museum (CAFAM) even reach the front reception desk, they are likely to notice Nathalie Miebach‘s “She’s Coming, She’s Coming on Strong,” which occupies an entire wall in the lobby of the building. This massive work tracks the converging paths of both Grace and the Halloween nor’easter, which combined to create the terrible storm that provoked its title exclamation.

Miebach creates musical and visual works of art out of meteorological data. Different weather variables—temperature, barometric pressure, wind speed, and many others, depending on the particular phenomenon depicted in a given work—are each identified by distinctive beads, tiles, wooden reeds, pinwheels, paper tabs, and other materials. Using basic basket-weaving techniques to create a grid, these markers are then arranged in accordance with an idiosyncratic three-dimensional notation system to create not only a graphic display that visually represents a discrete weather event or span of time, but also a uniquely coded musical score.

Miebach’s Changing Waters exhibition at CAFAM includes representations of various storms, hurricanes and meteorological occurrences in the Gulf of Maine region, where the artist resides. “Retiring Bob” conveys the fearsome power of 1991’s Hurricane Bob. “A Duet of Blizzards” contrasts the specific data of the great 1978 snowstorm that shut down the entire northeast for several days with those of a more recent storm in which Miebach’s own husband was caught driving home. The sculptural “Hurricane Noel” also illustrates a moment of severe weather conditions in the area from 2007.

One flight upstairs from Changing Waters at CAFAM is a separate exhibition ostensibly unrelated to the collection of pieces by Miebach. Artifacts of a Life Lived by the Living (to Live) is a group show featuring different artists whose displayed work has performed a kind of self-therapeutic function, providing an opportunity to order and thereby contain their own personal obsessions. Somehow, even though these two exhibitions were curated independently of one another, it’s not hard to imagine Miebach’s works sharing that thematic space with the Artifacts.

➸ Nathalie Miebach: Changing Waters and Artifacts of a Life Lived by the Living (to Live) are both on display through January 5 at the Craft and Folk Art Museum, 5814 Wilshire Boulevard (at Curson). The museum is closed Mondays.