Home Art FRAMED: These Jellybeans Weren’t Made for Eating 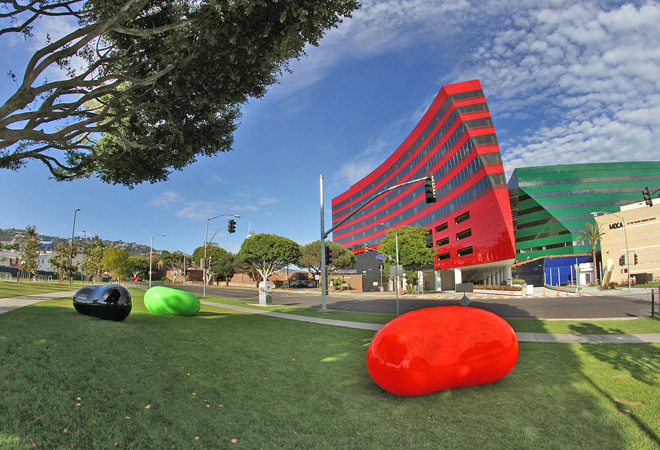 Whether you grabbed them indiscriminately by the handful or selectively picked out the colors you liked the most, chances are you loved jellybeans when you were a kid–and maybe you still do as an adult. So it’s almost impossible to pass the three enormous, shiny specimens nestled in the grass of West Hollywood Park without experiencing a fleeting, visceral pang of childlike glee. What a way to reencounter old treats in a fantastical new context.

Each piece of high-polished fiberglass resin candy in Canadian sculptor Cosimo Cavallaro’s “Love Your Bean” installation is about nine feet long and five feet tall. Working with the legendary southern Californian industrial artist Jack Brogan, Cavallaro began fabricating the beans by carving out styrofoam molds with a chainsaw and then relentlessly smoothed them into shape, both before and after their plastic outer coatings were poured. The surfaces of these massive beans demand to be touched. Or climbed on, if you happen to be a kid (although Cavallaro has tried to dissuade that particular activity).

The artist was inspired to assemble these colorful icons of innocent pleasure when he found photographs of his childhood after his mother’s death. After an extended period in his career when he was more obsessed with the idea of tearing things down and destroying them, “Love Your Bean” represents a turning point for Cavallaro, an opportunity to explore themes of love in his work. To “love your bean,” he explains, is to love yourself, which, he asserts, is just about the most powerful reaction a work of art can evoke.

“Love Your Bean” will remain on view in West Hollywood Park, part of the West Hollywood Design District, until June 2014. The beans sit on the west side of San Vicente Boulevard between Santa Monica Boulevard and Melrose Avenue.