Home Art Framed: The Witkin Brothers, Not Separated at Birth, Reunited at 74 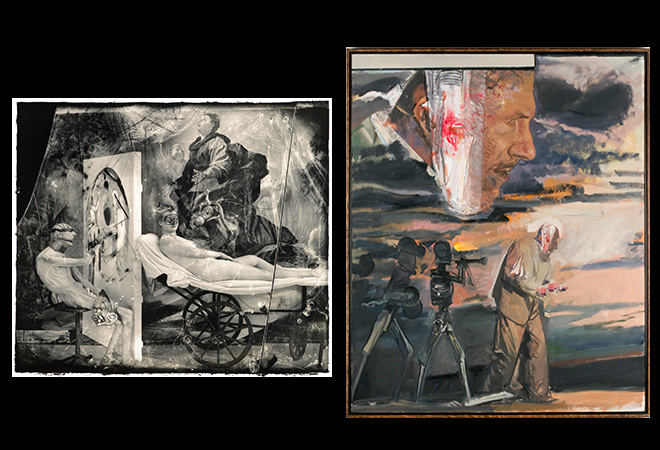 Painter Jerome Witkin and photographer Joel-Peter Witkin, twin brothers born in Brooklyn in 1939, have both forged successful careers, emerging with their own styles and in different genres. Jerome’s epic figurative paintings, many of which address social issues and humanitarian crises, have been acquired by the Metropolitan Museum in New York and the Uffizi Gallery in Florence. Joel-Peter’s photographs, equally celebrated and derided for their intensity and shock value, have been exhibited at museums around the world including the Guggenheim, the Louvre, and the Victoria and Albert.

Twin Visions, which recently opened at Jack Rutberg Fine Arts in Hollywood, offers a rare opportunity to consider both artists’ work in a joint exhibition. Rather than force comparisons between the two at every step, the gallery has wisely hung each collection in its own set of rooms. While Twin Visions is set up as a single, unified show, visitors have a chance to consider each artist’s body of work in its own context before embarking on the inevitable comparisons.

Most of Joel-Peter Witkin’s photographs on view here are undeniably disturbing, reveling as they do in human deformities and grotesquely exposed body parts. Even as he plays with viewers’ discomfort at the physical irregularities of his subjects, the dignity of the people he depicts isn’t compromised, but strangely heightened. It’s as though the photographer and his models are inviting the viewer to share their evident mutual respect, their ease in each other’s company, and perhaps even a sense of humor about the whole enterprise.

The paintings of Jerome Witkin included in this show highlight the effect of social and political ills on the human condition. Occupying an entire wall, “German Girl,” one of two haunting Holocaust-related paintings, displays a scene of utter moral failure in the face of human suffering. “Crack House” drags all who view it into the squalor of a drug lair and indicts us in the degradation of its inhabitants.

Another persistent theme in Jerome’s paintings and drawings (some dating back to the 1980s, others less than two years old) are depictions of the eternally suffering, suicidal artist Vincent Van Gogh. The “demons” that haunt Van Gogh in these works transcend the personal biographical travails of the painter, whose tragic fate is not his alone. Joel-Peter’s staged photographic depiction of the 17th-century artist Poussin busy at work in hell is a parodic riot; the exquisitely pastoral painter is subjected to the debasement and indignity that the photographer Joel-Peter’s body of work seems to suggest may confront us all.