Home Art Framed: The Stuff of Life Looks Like an Angel of Death in... 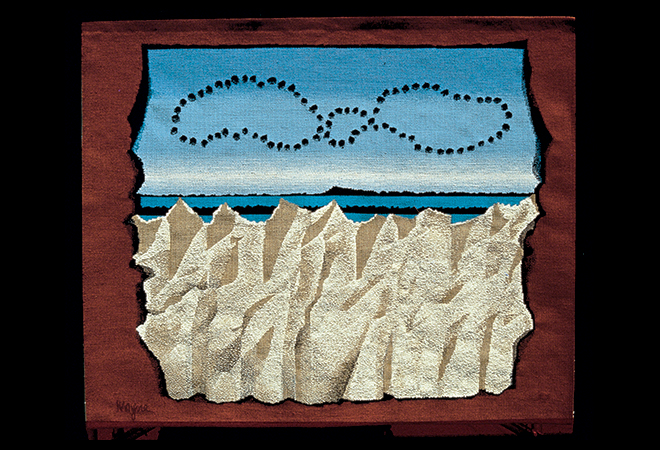 June Wayne’s tapestry “Col Noir” is based in part on a visual pun derived from two unrelated definitions of the French word col. In one sense un col refers to something worn around the neck; it also means a mountain pass. Hovering above the peaks in the distance and the rocky crags in the foreground of this desolate landscape, a black strand necklace twisted into three loops fills the sky like an enormous winged beast that looks like it might be on the verge of making a swift, violent descent.

By the time visitors reach this piece in the Pasadena Museum of California Art’s new retrospective of Wayne’s work, they’ll have encountered the recurring image of a DNA helix often enough to recognize that the twisting black strand in the sky represents not an angel of death but the raw material of life. Wayne herself was long “fascinated by genes’ total indifference” to the human beings they formed, by the “paradox of knowing [so] much about ourselves, yet nonetheless being at the mercy of this system of molecules.” An earlier lithograph by Wayne that closely resembles “Col Noir” was named “The Verdict,” as the artist explained, “because it refers to an inherited genetic verdict.”

The genetically coded helix was one of several scientific phenomena that Wayne repeatedly explored in her work as a painter, printmaker, and tapestry weaver. In the Solar Flares lithograph series, she imagined what the sun’s rays looked like at close range. Another group of prints, collectively designated the Stellar Winds, achieve an extraordinary fine detail. Tidal waves and massively enlarged fingerprints are additional subjects of multiple works.

Apart from all the images inspired by scientific themes, Wayne also produced a remarkably moving series of prints evoking the life and times of her mother, Dorothy (a 17-minute video featuring these pieces with Wayne herself reading Dorothy’s letters to her, originally produced for KCET in the 1970s, is worth watching). Earlier series on view were inspired by Franz Kafka and John Donne. The surrealistic Kafka prints were among the first she produced after moving to Los Angeles in her mid-20s during World War II. She lived here for most of the rest of her life, passing away in 2011 at age 93, although she also launched New Mexico’s Tamarind Lithography Institute in the 1960s. When she returned to L.A., she focused her attention on promoting women’s artistic careers with a workshop she officially called “Business and Professional Problems of Women Artists,” but which soon became popularly known as “Joan of Art.”

Later in her career, Wayne created a large number amazing abstract, near-monochromatic, highly textural paintings, some made of metallic leaf material, others made from styrene packing “peanuts.”  These works practically call out for you to run your fingers and hands along their surfaces. But, of course, you can’t.