Home Art Framed: The St. Francis Dam Was a Glorious Disaster About to Happen 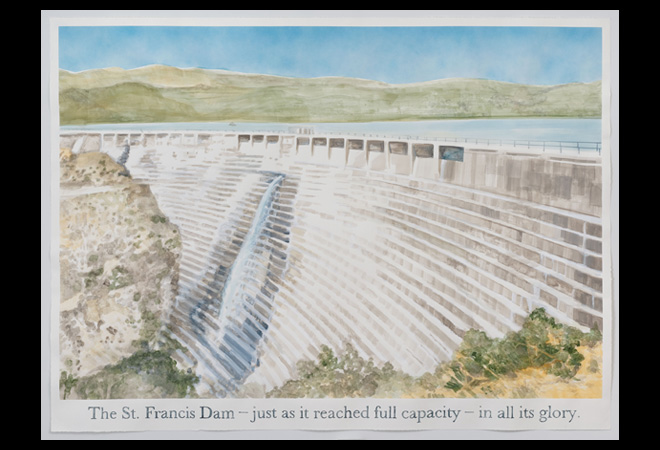 The 1920s photograph of the St. Francis Dam that’s reproduced and enlarged in Rob Reynolds’s painting depicts an awesome feat of civil engineering. A man-made waterfall issuing from the center of the dam’s graceful curve implies that resources are being harnessed in pastoral harmony with the natural setting of the Santa Clarita Valley’s San Francisquito Canyon region. The reservoir of water intended to serve the quickly growing metropolis of Los Angeles looks like a smooth-surfaced lake observable from a promenade atop the dam itself. The image’s promotional caption explicitly describes the impression that its panoramic vista leaves on a casual viewer: The St. Francis Dam at full capacity is just a glorious achievement.

On the night of March 12, 1928, not long after the dam was built and this picture was taken, the structure collapsed, unleashing 12 billion gallons of water in a flood that killed over 450 people. The impact on the central Los Angeles area that would have benefited from all that stored water, however, was minimal.

The St. Francis Dam painting is one of ten enormous watercolors by Reynolds in Just Add Water, a series commissioned by the Natural History Museum to commemorate the 100th anniversary of the opening of the Los Angeles Aqueduct on November 5, 1913. That was exactly one day before the NHM itself opened its doors to the public for the first time. Encircling the second floor of the museum’s Haaga Family Rotunda, most of these paintings contemplate the controversial  history and impact of the 223-mile pipeline, which funnels water from the Owens Valley  to Los Angeles, with a solemn and wistful irony.

An almost eight-foot-tall painting of an ordinary glass of water is captioned with the entire speech that William Mulholland, who oversaw the aqueduct’s creation, delivered to an excited crowd at its opening ceremony in 1913: “There it is. Take it.” In another six-by-eight-foot watercolor, a short segment of the massive white horizontal water-bearing pipe that casts its shadow over the Owens Valley might be mistaken for clouds if not for the small yellow “Danger” sticker conspicuously slapped on to it. The early-morning image of a Mono Lake tufa rock formation near the northern end of the aqueduct, captured in June of this year, looks idyllic without the underlying information that the lake’s water level has gotten drastically lower as a result of consumption hundreds of miles away in Los Angeles. And Reynolds’s rendering of the architecturally iconic facade of downtown’s Department of Water and Power building  bears all the ambiguous psychological complexity of a human portrait.

Hanging from the upper rotunda’s guardrails are 13 banners made of translucent fabric that collectively feature more than 6,000 names of people directly impacted by the building and operation of the aqueduct between 1900 and 1930. Some actively participated in or benefited from its construction; others opposed it or were even killed in the course of its development. Standing downstairs or across the rotunda, the viewer sees Reynolds’s individual paintings directly through these scrims as the mostly forgotten names become superimposed in space over the images themselves.

➸ Just Add Water is on display at the Natural History Museum through August 3.