Home Art Framed: The Real Abbot Kinney and His “Venice of America” 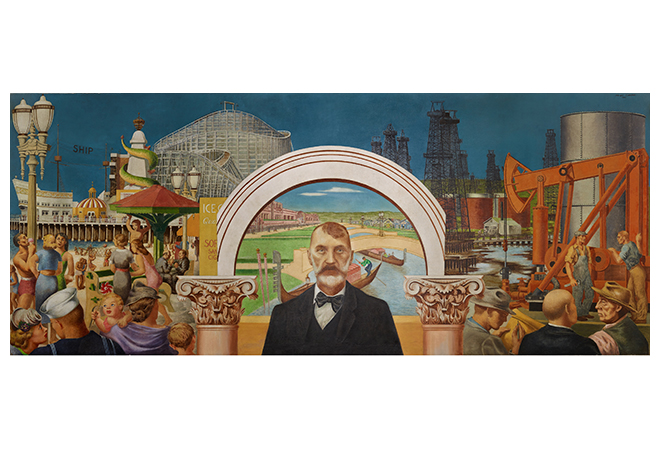 Edward Biberman, Abbot Kinney and the Story of Venice, oil on canvas mounted on aluminum

Before its more recent designation as the coolest street in the United States, the name Abbot Kinney belonged to the man who developed the “Venice of America” resort area, just south of Santa Monica, in the early twentieth century. Since then the neighborhood that has emerged from the vision of conservationist, tobacco magnate, and urban planner Kinney (1850-1920) has become one of the city’s most iconic neighborhoods.

For much of the 1930s and ‘40s, otherwise unemployed artists were frequently commissioned to design large-scale public works under the auspices of various New Deal programs such as the PWAP (Public Works of Art Project), WPA/FAP (Works Project Administration’s Federal Art Project), and the U.S. Treasury Department’s Section of Fine Arts. On the heels of his successful Prehistoric and Spanish Colonial mural in the Western Division Federal Courthouse downtown, Edward Biberman was assigned to paint the historical Abbot Kinney and the Story of Venice for Venice’s post office in 1941.

Biberman’s social realism-influenced Venice painting is divided into three distinct thematic areas. In the central section Kinney himself is framed by a rounded archway characteristic of both the Venice in Los Angeles and the Italian city that inspired it; the idyllic canals in the background are also defining features of both townscapes. The left side of the mural depicts Venice as the lively seaside playground of Kinney’s imagination, with people of all ages enjoying the sun. At right, by contrast, we see the incursion of Big Oil interests, which had begun their on- and offshore drilling activities in the 1920s, blighting the shoreline with heavy machinery and storage tanks.

A couple of years ago, movie producer Joel Silver (Die Hard, Lethal Weapon, The Matrix) bought the old Venice post office where Biberman’s mural originally hung and began converting the building into headquarters for his production company. As part of the renovations, Silver agreed to restore the Biberman mural and keep it in its original location, though the federal government maintains legal ownership of the painting itself.

From now until November 16 the work is the centerpiece of a one-room exhibition at LACMA, where it is surrounded by historic photographs and documents relating to Venice, Kinney, and Biberman. There’s also a video loop showing the range of (often uncommissioned) mural work on Venice buildings that contemporary artists have created. Directly facing the Biberman mural on the other side of the gallery room, for contrast and comparison, is the eighteenth-century Italian artist Canaletto’s large oil-on-canvas painting of the Piazza San Marco.