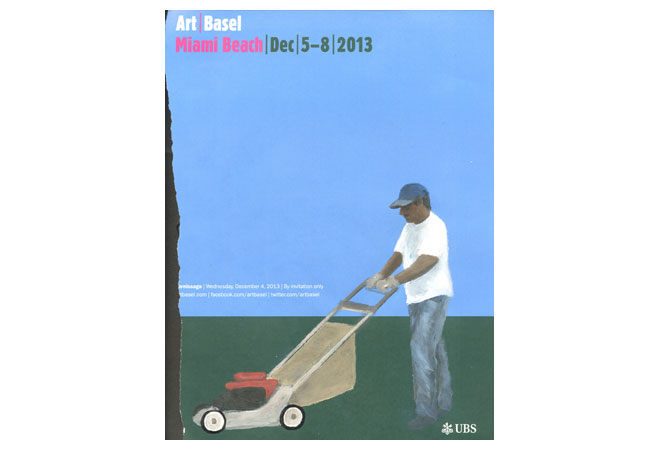 “The Maintenance of Contemporary Art” (2014); courtesy of the artist and Charlie James Gallery

Art|Basel, held every December in Miami Beach, is a major contemporary art trade show that Swiss bank USB has been sponsoring for two decades. One simple image promoting the 2013 event featured monochromatic color planes, horizontally divided, of light blue and deep green. Encountering this picture in Art in America as an ad for a “by invitation only” preview exhibition, Ramiro Gomez Jr. ripped the page out of the magazine and painted a Mexican laborer mowing that field of green directly onto it.

“The Maintenance of Contemporary Art” is one of several pieces in which Gomez has provocatively doctored and re-contextualized pages torn from high-end art and design magazines like Artforum, Interview and Dwell. These are currently on view in the Distant Parallels group show on view at downtown Long Beach’s Collaborative art space, which also includes his strategically placed cardboard figures of service workers performing tasks like washing the gallery’s front window or plugging in an electrical cord. Gomez describes his works as “interruptions” because they stop us while we’re viewing conventional scenes of ease and comfort and force us to look at the invisible hardships underlying them.

Presented by the Museum of Latin American Art, “Distant Parallels” features work by five young Los Angeles artists with personal and family origins in Mexico and Colombia. Mexican-born Miguel Ángel Mejía’s black-and-white photographic images, captured on film rather than digitally, depict abandoned places and people in communities on both sides of the California-Mexico border. All of his photos in this show are ruminations on the profane “chingada” concept popularized in Mexican culture by novelist Octavio Paz.  It’s now “the most common word in Mexico,” according to Mejía, and has multiple emendations.

Three paintings by Luis Ernesto Zavala juxtapose globally recognized cartoon characters with Mexican product logo images. These works recall the surprise Zavala felt when he emigrated to the U.S. as a teenager and encountered the Smurfs and other figures from his childhood in a new environment. Zavala‘s nostalgic identification with specifically Mexican brands like ChocoMilk, Cerveza Carta Bianca and Corona Extra was also transformed as these products gained traction in the wider world.

In a series of short videos, Adriana Baltazar recalls the rituals and routines of personal care in her Mexican family’s household—washing pots and pans with dirt, placing warm tortillas on a stomach to ease discomfort, washing hair with bar soap—and compares them with corresponding approaches promoted in contemporary U.S. culture. Gala Porras–Kim’s reproduction of the 2nd century Olmec Mojarra Stela glyphic stone, one of the Americas’ earliest written documents, starkly demonstrates the ancient origins of Mesoamerican culture and civilization. Visitors can also create their own crayon-and-paper rubbings of the images on the surface of the stone.

As Protests Rage in Chile, These Patchwork Pictures Are More Relevant than Ever