Home Art Framed: “Photographic Pantomime” Will Be Your Mirror, Reflect Who You Are 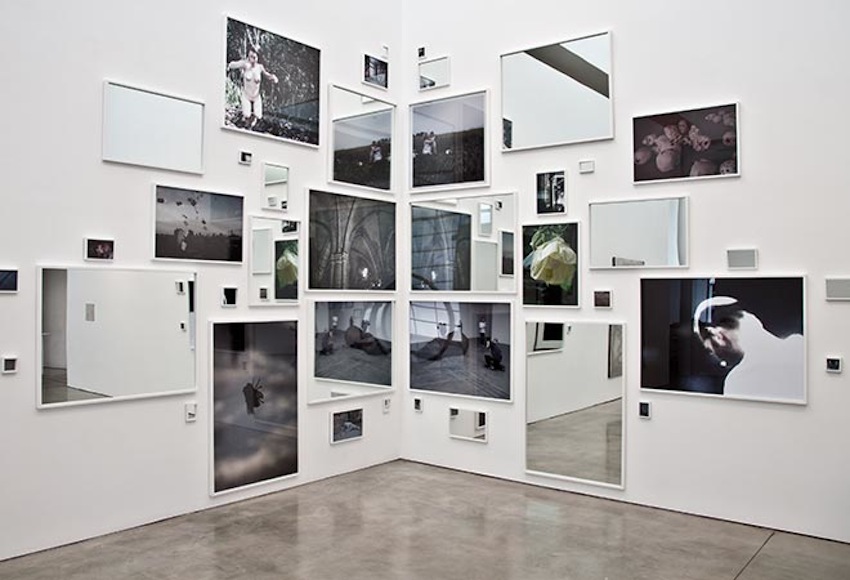 “Everything is Nothing Without its Reflection: A Photographic Pantomime” (2013-14). ©Douglas Gordon. Courtesy of the artist and Gagosian Gallery. Photography by Benjamin Lee Richie Handler.

Photographs and mirrors both create doppelgangers. They also expand these images into additional dimensions: Photos confer permanence in time while mirrors’ flat surfaces create new fields of visual depth. But what’s the effect when mirrors are designed and arranged to reflect photographs?

Douglas Gordon’s arresting installation “Everything is Nothing Without its Reflection: A Photographic Pantomime,” featured in the new group show Clear at the Gagosian Gallery in Beverly Hills, comprises 20 photographs of varying scale, all matched with correspondingly sized and identically framed mirrors hanging in precise catty-cornered positions across a perpendicular wall corner. Mirrors and photos both occupy spots on either side of the dividing line, and the reflective glass that covers the photos creates an initial disorientation as to which piece is where. The photos here represent various phases of Gordon’s life and career. Some are stills from his film and video productions like Zidane and Play Dead; others are personal shots that the artist took while on vacation or saved from his childhood.

By entering the physical area where these images are on display and considering them from a variety of angles, the viewer forces their contents to shift within their frames. Photos appear and disappear from view in the mirrors; so does the person looking at them. To contemplate “Everything is Nothing Without its Reflection” is to participate in the perpetual recontexualization of Gordon’s photos along with our own relation to them. The unusual shared physical space space also offers a fleeting sensation that our encounter with Gordon’s work is taking place in a unique alternate dimension.

Disorienting alternate perspectives are a unifying theme of the 23 works, each by a different artist, in Clear, and several of these riff specifically on our expectations of what mirror images are supposed to provide. Right next to the Gordon installation, Michael Craig Martin’s conceptual piece “An Oak Tree” plays with the Lewis Carroll question of whether milk we see in a mirror would be okay to drink. Visible at the end of a passageway from one gallery room to the next, “Your Focus Fade” by Olafur Eliasson is a mirror in which we can’t see our own reflection. Richard Artschwager’s “Mirror/Mirror” isn’t a mirror at all. Germaine Kruip’s angular mirrored mobile “Counter Movement (Mirrored/White)” refuses to cast even a glimmer of light as it spins in the air.

Clear also includes works by DeWain Valentine, James Turrell, and Larry Bell, seminal figures in the Light and Space movement that originated in southern California in the 1960s. In their spirit, too, just about every piece in this ethereal show invites visitors to join in on a bold exploration into a distinctive, esoteric approach to art-making or quasi-scientific discovery.

Two dozen jars arrayed on a table all contain an individual book (by Kafka, Gogol, Stephen Crane and others) or personal document (passport, credit card contract) that Kristen Pieroth has literally boiled down and distilled to its liquid essence. Julien Bismuth has destroyed all but a 6-foot square segment of one of the gallery walls. A 6-hour video follows artist Gianni Motti from behind as he treks around a 30-kilometer tunnel loop in the Large Hadron Collider facility at Cern in Geneva, Switzerland. A rare painting by the late psychic Ingo Swann conveys his impression of the out-of-body experiences he pursued throughout his career. An obsessively detailed chart by Mark Lombardi maps the artist’s understanding of the BCCI banking scandal.

This show at Gagosian contains plenty of mysterious elements, but as its name suggests there’s nothing hidden or invisible from view.

Hundreds of Artists Have Come Together to Say ‘Fuck Trump’