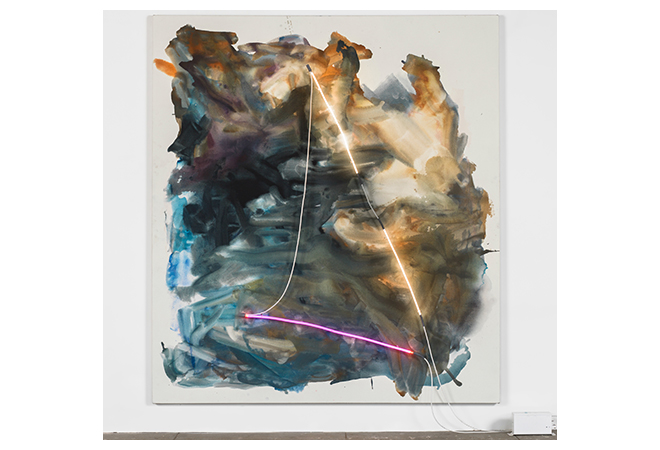 The coastal cities of Oxnard and Ventura aren’t in Los Angeles County, but the phrase “Oxnard Ventura” has streamed through our car radios into the region’s popular consciousness. It’s a familiar designation for an area right near our own—up where the 101 meets the 1.

“Oxnard Ventura” is one of seven pieces in Mary Weatherford’s new Los Angeles series of large abstract paintings that are currently on display at the David Kordansky Gallery.  Wide brush strokes in sandy tan and contrasting shades of blue evoke the local shoreline, but the work doesn’t depict two adjoining beach communities. It’s a personal impression of the topography and energy of a specific locale, created by a native Southern Californian who has spent most of her career, so far, here in L.A.

Like its companions in this show, “Oxnard Ventura” is more complex than a two-dimensional picture. Once her painting was complete, Weatherford arranged tubes of colored neon light in different configurations on top of it until she was satisfied that she had achieved her desired composition. She then drilled holes through the linen support base and affixed the neon tubes just about four inches in front of the painted surface.

Weatherford’s distinctive technique never creates a gratuitous or jarring “effect.” The neon lights in many of these works offer a tonal contrast against darker underlying painted colors, and the wires connecting the lights to their power sources are always on full display. But these lights and their accoutrements are integral elements of the tableaux, not distractions from the painted areas behind them. Likewise the painted surfaces don’t recede behind the neon; they envelop and create a setting for it.

None of Weatherford’s Los Angeles paintings represent the central areas or familiar landmarks of L.A. The strong, bright red emanating from both the neon lights and the painted surface of “the light in Lancaster” is inspired by the Antelope Valley city’s annual poppy festival. Other works explicitly identified by geographical locations include “over Rose Hills” and “apparition in Artesia,” while some titles—“La Noche,” “1969,” “La Niña”—imply more personal associations.

Weatherford has created comparable series exploring places as disparate as Manhattan and Bakersfield. Los Angeles, though, is where she lives and works, and the Los Angeles paintings resonate with the deep familiarity of an artist at home.