Home Art Framed: Not Seeing the Light at LACMA 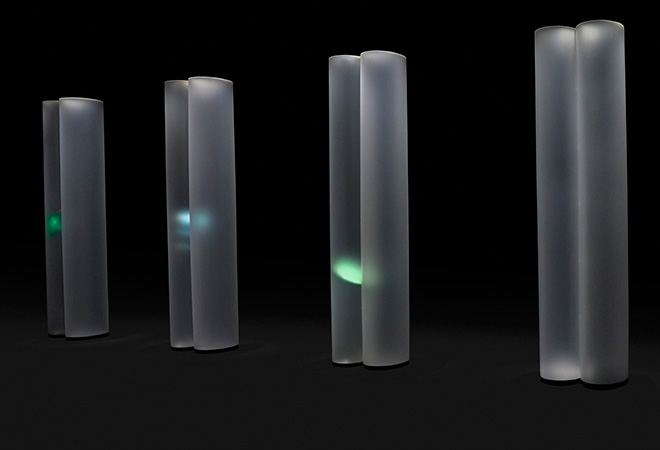 Most art exhibitions don’t require a spoiler alert. But the dozen eight-foot high, luminous, double-posted acrylic columns in Helen Pashgian’s new sculptural installation “Light Invisible,” now on view at LACMA, are not what they appear to be when you first look at them. It’s a genuine surprise to discover, after several minutes, that the work is a brilliant Op Art illusion.

So avert your eyes from the small sign placed next to the installation entrance, which reads “Despite their appearance, these columns…” You should experience the deceptive effect of “Light Invisible,” and perhaps even discover how it’s created, for yourself. Also, if you don’t want to read about the difference between what you think you’re looking at and what becomes apparent once you really see the light, STOP READING NOW.

The space in which the 12 columns are lined up (roughly ten feet apart) is almost completely dark, illuminated only by the radiance of the pieces themselves. The columns are identical in their external construction and every one appears to be its own ethereal source of light. Some of the columns contain nebulous forms that look like small internal lamps—each a unique size, shape, and color—shining additional light into the dark room.

Walking among the columns, you might notice that the character of the light changes when viewed from different angles and distances. With the passing of time, you may also perceive the exhibition space itself becoming a bit brighter as your eyes adjust to the darkness.

What no one can see when they first enter the room is that the inconspicuous black cylinders hanging down from the ceiling above each column all contain recessed LED bulbs imperceptibly beaming light straight down at the tops of the individual pieces. These tiny overhead lights are hidden from sight unless you stand almost directly beneath them, observing a column at close range, and look straight up.

Even after you notice them, you might not immediately discern that these seemingly ancillary ceiling lamps are, in fact, the only source of light in the room. The radiant glow from the columns and their mysterious internal organs is actually nothing but a reflection of what’s invisibly streaming down from above.  Any shifting perceptions of the room’s darkness are also a function of these lights, which cyclically brighten and dim at a pace too slow to be readily perceived.

Pasadena-born Pashgian, who at almost 80 years old still lives and works in Los Angeles, has long been identified with Southern California’s Light and Space movement, but “Light Invisible” is her first large-scale sculptural installation—and this is her first solo exhibition at a major museum. The way Pashgian describes her work, these 12 columns collectively disclose their relationship with the invisible light that they reflect without revealing the entire truth about it. For viewers it’s an invitation to search for further clues and revelations. (The effect this work achieves is the opposite of what Pashgian’s friend and fellow Light and Space artist James Turrell creates in his skyspaces. After nearly a year, his LACMA retrospective closes this weekend.) Pashgian also identifies “Light Invisible” with a distinctively SoCal kind of “harsh, shimmering, white light that glints off cars and other metal surfaces,” something quite different from the golden-hued sunlight for which the region is usually celebrated.