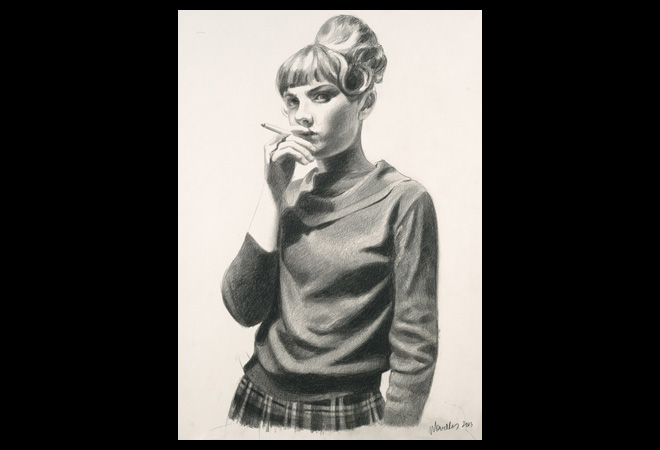 Nine pencil-drawn portraits of vaguely restless young women introduce the unsettling world of Mercedes Helnwein‘s new exhibition, The Trouble With Dreams at the Merry Karnowsky Gallery. Each of these subjects looks like she could use a confidante, but the pictures don’t convey any of the stories these women may have to tell.

Only the subject identified as “Maybellene Kennedy” appears twice in this first series. As she toys with a cigarette in the drawing that bears her name, she appears to be on thoughtful alert, unintimidated by—perhaps even defiant of—whatever she’s contemplating. A few images down the gallery wall, in a picture entitled “Jeff II,” she appears again, seated and staring blankly ahead as she drinks coffee out of a mug stenciled with the name “Jeff.” There’s a mark on one side of her face that’s absent in this first portrait, though it’s hard to say what it is. It could be a scab, a stain or something else.

The Maybellene Kennedy figure is one of only three or four subjects who appear in more than one of the 34 pictures that make up The Trouble With Dreams. “Waterbound,” the centerpiece in a triptych of portrait drawings that dominate one area of the gallery has her leaning against a wall for support in what looks like a state of despair. In “T-Rex,” a work in pencil and oil pastel, she clutches a toy dinosaur, simultaneously holding it close to her and turning away from it. (The mark on her face is present in “T Rex,” absent in “Waterbound.”) Partial sketches of the “Maybellene Kennedy” and “Waterbound” images reappear as two of the six clustered watercolor-and-pencil studies in bold, distorting magenta or burnt orange that comprise Helnwein’s “Thought” series elsewhere in the exhibition.

A few of the young women portrayed in these works on paper wear nurses’ caps or uniforms, a thematic link to one of the two 12-minute videos by Helnwein alternately screening as a loop in the gallery’s projection room. In one of these scenes an employee breakroom gradually and silently fills with nurses sitting around pensively, some having a smoke, before they file out again. In the other, a similarly plotless silent drama plays out in a police station: One uniformed officer stands immobile and stares at the viewer, oblivious to the comings and goings of his colleagues around him. The ominous musical track underlying these videos matches the atmospheric impression of the collected portraits in the main gallery.

The Trouble with Dreams runs through November 2 at the Merry Karnowsky Gallery, 170 South La Brea Avenue. The gallery is open from noon to six p.m. Tuesdays through Saturdays.