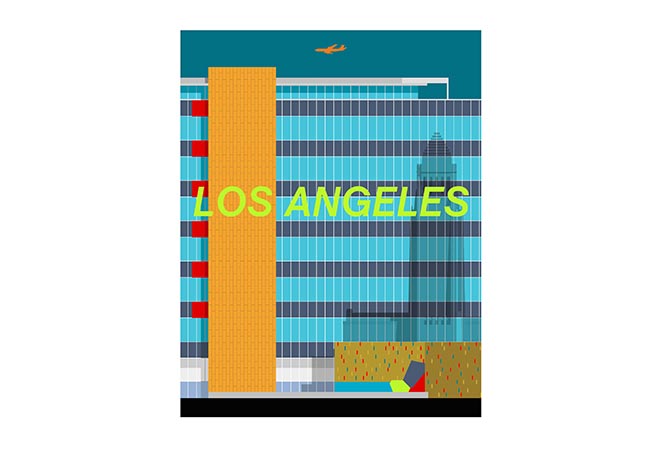 Architect Richard Neutra is famous for residential homes and apartment buildings that dot Southern California, but he also designed a few public buildings including the Los Angeles County Hall of Records in downtown’s civic center. Though the 15-story structure (which no longer houses the county records) is less familiar than other midcentury standouts like the Westin Bonaventure hotel and the Music Center, it’s still generally considered a modernist classic. In front of the building, the Topographical Map of Water Sources in the County of Los Angeles, a mosaic mural by Joseph Young, provides a visual counterpoint to Neutra’s repetitive geometry.

The County Hall of Records looks especially Mad Men-era cool in a brightly colored print by San Francisco-based graphic artist and painter Michael Murphy, a former practicing architect who specializes in illustrations of California modernist settings. Paying tribute to what he enthusiastically describes as downtown LA’s “architectural zoo of modernism,” he places an image of City Hall in the glass windows’ reflection, although that Art Deco landmark is a couple blocks away from, and doesn’t face, the Neutra building. The commercial airplane flying overhead is something of a Murphy trademark. (His even calls his artist website supersonicmodern.com.)

Though Murphy regularly creates images of San Francisco and Palm Springs, he calls Los Angeles “one of the best cities in the world to view the many stages of modern design, ranging from the early 20th century to the present day. [The] acceptance and inclusion of new ideas and forms is something that I believe is unique to this city.” He’s also impressed by how dedicated the museums here are to the emergence of L.A.’s distinctive architectural history and style. Other L.A. locations that Murphy has repeatedly featured in his work include LAX, the Capitol Records building, and the Department of Water and Power building. “I almost rear-ended the car in front of me when I first saw [the DWP building],” Murphy says. “It just blew me away.”

Murphy’s architectural training enables him to draft technically accurate renderings of buildings before he adds a distinctive and fantastical palette of colors to the scene. Working from his own photographs “and filling in some gaps with Google Street view,” Murphy says he has just begun to explore L.A.’s modernist “goldmine” and figures there’s easily another decade of discovery ahead. “It’s sort of all there waiting to be looked at and appreciated.”