Home Art Framed: In His Photos Moby Imagines a Post-Apocalyptic Baptism and a Uniquely... 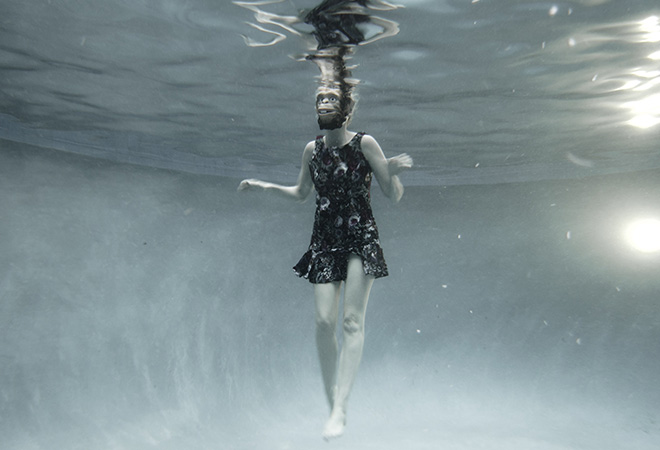 Musician, DJ, and recording artist Moby has been an avid photographer since childhood, and in 2011 he began formally exhibiting his work. His new collection of outsized images, Innocents (which shares a title with his album released last fall), is on view through March 30 at Project Gallery in Hollywood. Many of these photos feature people wearing animalistic masks in a variety of banal settings, from supermarket aisles to traffic tunnels. “I’ve invented this cult,” Moby explains, “the world’s first post-apocalyptic cult.”

Rejecting popular notions of the “apocalypse” as a cataclysmic doomsday, Moby was inspired by the Greek word’s original, less pernicious meaning: a revelation that exposes something previously unseen. Moby says he got his first inkling of this alternate interpretation while observing the extremes of human behavior one night in an Atlantic City casino. “In my drunken, addled state, I thought, ‘Oh, this is the apocalypse. Things are cracking up and going wrong in the most fantastically unclassifiable ways.’”

Moby eventually came to embrace the concept of “a benign, or sweet, apocalypse, as if some atavistic forces were trying to maintain the status quo and other forces were more accepting of change. One of the reasons I moved to L.A. is that to me it’s what’s called, in contemporary parlance, an ‘edge city.’ It’s a city of cracks and of ‘un-cohesion,’ and I find that really interesting. It’s also a city with access to grandeur and nature. I started looking around through this prism for evidence of this strange apocalypse.”

The 11 photos hanging in the Project Gallery are part of a series of more than 40 images inspired by the scheduled Mayan apocalypse of 2012, which Moby says “happened in an instant,” and the “Cult of Innocents” that he imagines it spawned. “For the last 2,000 years, all the cults have been pre-apocalyptic. Living in the Hollywood Hills, which is like ground zero for cults, I thought it would be interesting to borrow from traditional iconography and craft this strange cult.”

The baptismal portrait “lone” shows a young woman in an ape mask underwater in a swimming pool. Despite her uncomfortable position, this particular member of the Cult of Innocents could hardly look more tranquil or at peace with her surroundings and her situation. If the initiation into Moby’s imagined cult is this serene, perhaps goodness and mercy really are what follow its adherents all the days of their post-apocalyptic lives.

Innocents: Photos by Moby remains on view at the Project Gallery through March 30