Home Art Framed: “I’m Lovin’ It” Offers McDonald’s on the Side 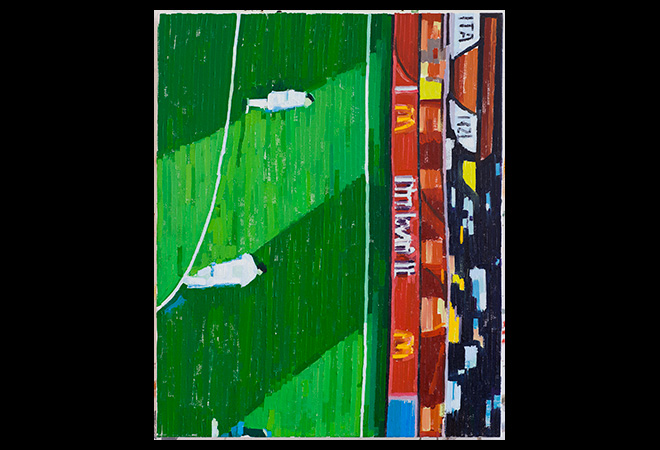 The midfield vantage point on the soccer match in Tel Aviv-based artist Guy Yanai’s painting “I’m Lovin’ It (Italy Loses)” is an angle instantly familiar from television broadcasts of sporting events. Hardly less prominent than the players or the field, the sideline wall in the background features an all-too-recognizable image of McDonald’s Golden Arches and the accompanying slogan “I’m Lovin’ It.” Though there is a real athletic contest going on (one destined to disappoint any Gli Azzurri diehards), the action of the game as presented here gets subsumed by the communications media surrounding it.

The attentive viewer of this work, as well as five of the other 17 oil paintings in Yanai’s Accident Nothing exhibition at the new Aran Cravey Gallery space in Hollywood, will also notice that these images are hanging sideways.

The White House in Washington D.C., a Stockholm street, the Great Pyramids of Egypt, an Israeli kibbutz’s guest quarters, and a Hockney-inspired backyard swimming pool—all of these scenes are rendered, like “I’m Lovin’ It,” as bright icons of a distant part of the world, each viewable in its rectangular frame as though you’re looking through a window or a broadcast screen. Yanai himself, we are informed, painted all these images horizontally from what we might colloquially call a “right side up” perspective. But the pictures were then purposefully turned 90 degrees before they were ready to be displayed to the world.

Half of the works in Accident Nothing comprise the series of “Nothing” paintings—nine small, square (non-sideways) tableaux featuring vividly colored geometric shapes, some arranged in representations of simple images like an awning, a cinema projection or a croquet pole while others are expressly abstract. The paintings in this set all radiate a dynamic stillness, suggesting a warm and compelling place distinguished by nothing happening.

Every one of the works on view in Accident Nothing, including three large, context-free portraits of trees, features a distinctively striated brushstroke. It’s as if the paint had been applied with long parallel strips of tape or a sharp-edged tool. In fact, the highly visible stripes that stretch over long expanses of each painting surface testify to the hypnotic meticulousness of the artist’s technique, a contemplative state that anyone encountering these works may get drawn into.