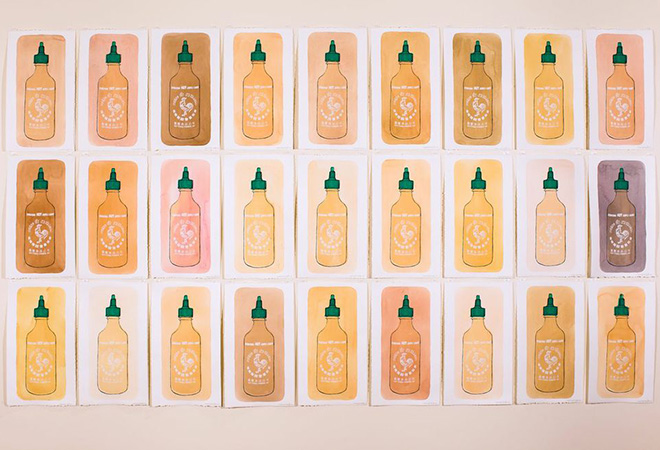 More than 50 years after Andy Warhol created his legendary set of paintings featuring a lineup of Campbell’s soup cans, L.A.-based Taiwanese artist Ching Ching Cheng’s “Sriracha Hot Chili Sauces” series offers a striking homage to that work while updating its implicit message. Just as Warhol’s celebration of the midcentury supermarket staple conveys an appreciation for homogeneity and conformity, Cheng’s presentation of a mass-produced food item speaks to the multicultural culinary adventurism of our day. For all their virtues, Campbell’s classic condensed soups were never intended to spice up the family dinner table; the red sauce with the rooster on the bottle, by contrast, is all about providing a kick.

Sriracha, along with its Guadalajaran-American counterpart Tapatío, are the two sauces of honor in “L.A. Heat: Taste Changing Condiments,” an offbeat new exhibition at the Chinese-American Museum downtown. Long before they began inducing beads of sweat around the world, these taste bud tinglers were both conceived, tested, marketed, and distributed here in Los Angeles County—and both products continue to be made here exclusively (though not without controversy for sriracha). The original Tapatío factory was a 750-square-foot building in Maywood that was leased in 1971 by the sauce’s inventor, Jose-Luis Saavedra, who later transferred his company’s operations to its present home in Vernon. Sriracha was created in 1980, and its initial success in local Asian communities led manufacturer Huy Fong Foods to establish a production plant in Rosemead in 1986, with a second facility added in Irwindale in 2010.

“L.A. Heat,” which marks the museum’s tenth anniversary, features work by approximately 30 locally based artists who use images of these sauces to express attitudes and relations toward Los Angeles while exploring its unique cultural mix. In Daniel González’s print, itself titled “L.A. Heat,” the sombreroed Charro figure of the Tapatío label and the Sriracha rooster tower over the city’s downtown skyline like combatants squaring off for a turf war. Yoshie Sakai parodies West Side Story in the short video Hot Side Story, which takes the condiment war, now including Heinz ketchup and French’s mustard, to locations like Costco, the Queen Mary, a race track, and a diner. Clutching one sauce in each fist, the Tapatío Charro in Michael C. Hsiung’s “On the Topic of How Various Sauces Can Make Pizza Better” rides the Sriracha rooster like a horse, dripping both products onto a slice of pepperoni pie.

A few conceptual sculptors have reimagined the distinctive Sriracha bottle as fire extinguishers or aerosol spray paint cans. A painting by Kwanchai Moriya personifies the sauce as an attractive young woman in a red dress with green hair. Gajin Fujita offers a spray paint portrait on a wood panel of a raw wasabi plant, another popular heat source. Perhaps the most moving piece in the show, Jose Ramirez’s “Chile Harvest” painting offers an isolated image of a dignified woman tending a chile plant in the center of the canvas, surrounded island-like by a multi-colored whirl of graffitied letters, streaks, and swirls on all sides.

LA Heat runs at the Chinese-American Museum through July 12.