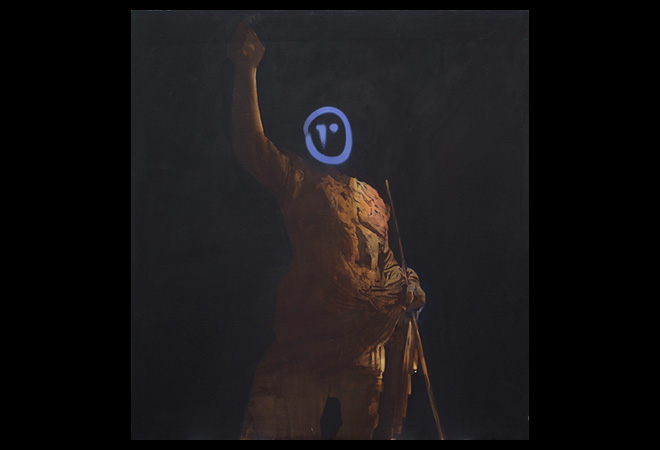 “The greatest man that ever lived,” Alexander Hamilton once told Thomas Jefferson, “was Julius Caesar.” Today, the name of Caesar is most often invoked when referring to the Las Vegas slot machine emporium where Celine Dion, Elton John, and Shania Twain alternate as headliners. The devaluation of the Roman emperor’s image captured in this mock portrait by eastern German artist Martin Galle is one perspective on “Fame” provided by the El Segundo Museum of Art’s (ESMoA) new exhibition of the same name.

The sculpture that the life-sized oil painting depicts is not an ancient artifact but part of the thematic décor at the Caesars Palace hotel and casino. Alienating viewers farther from the statesman who came, saw, and conquered than the resort’s designers have already done, Galle replaces the statue’s head with a spray-painted graffiti tag lazily indicating a human face. Here, as in almost all of the 50-odd pieces in the El Segundo show, we can hardly resist the invitation to contemplate how the mighty have fallen.

In this exhibition, “Caesar” is not the only large painting where the primary character’s image is effaced. In an early-1960s Socialist Realist painting, someone came along later and tried to remove the figure of charismatic Soviet leader Nikita Khrushchev receiving applause from Kremlin officials. This revision was only slightly successful and likely made after Khrushchev had been forced from power and exiled into obscurity by Leonid Brezhnev’s rival faction in 1964.

A joint project between ESMoA and Culver City’s Wende Museum, an institution that houses art and historic memorabilia from the former East Germany and other Warsaw Pact nations, this exhibition demonstrates the ephemerality of fame from several angles. An enormous head removed from what must have been a towering statute of Yuri Gagarin, the first man launched into outer space and one-time hero to half the world, lies on its back as if discarded along with Gagarin’s renown. A series of photographic color studies by Chuck Close for his celebrated “Nat” portrait in the National Gallery—but not the painting itself—raise the question of whether we may really be looking at a famous work. Peter Badge’s bucolic photo portrait of an Elvis impersonator is juxtaposed with old album covers featuring the once popular Soviet-bloc Elvis stand-in Dean Reed. Plus there’s a Warhol, a Basquiat, a Helmut Newton, a Garry Winogrand…

Snippets of every piece in the show can be glimpsed online via ESMoA’s Gallery page, but the effect of this hodgepodge of objects and images bearing down on you all at once can hardly be replicated. Intriguingly, the floor of the museum rises and falls in different areas, which makes the experience of perusing the exhibition feel like a physical exploration as well as a historical, artistic, and thematic journey.

“Fame” runs through November 24 at the El Segundo Museum of Art located at 208 Main Street in El Segundo. The museum is open Fridays through Sundays from 10 a.m. to 5 p.m. and by appointment.