Home Art Framed: Get the Gift of Love and You’re Perpetually in Debt 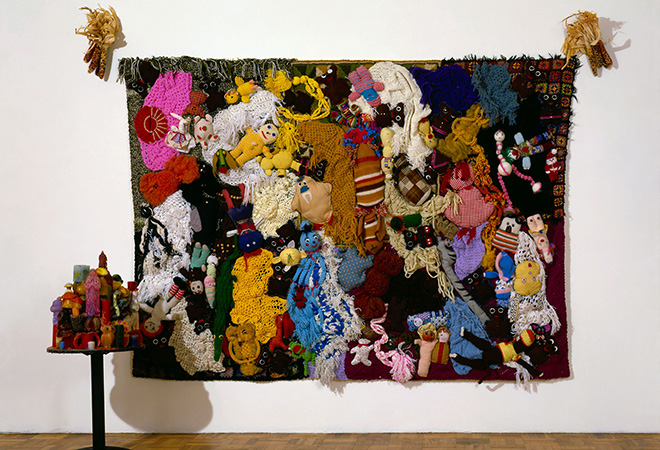 “More Love Hours Than Can Ever Be Repaid” and “The Wages Of Sin” (1987); photo courtesy of Mike Kelley Foundation for the Arts

In a 1991 interview with Bomb magazine, Mike Kelley described the wry, cynical idea that inspired him to crowd a large canvas with a colorful array of dirty stuffed animals instead of, say, with paint. He called the finished work “More Love Hours Than Can Ever Be Repaid”:

[It] wasn’t even about stuffed animals, it was about gifts…There were these Utopian ideas being bandied about [in the art world]: “Well, we can make an art object that can’t be commodified.” What’s that? That’s a gift… It’s going to escape the evils of capitalism. Well, of course that’s ridiculous, because if you give this thing to junior, he owes you something. The most terrible thing is that he doesn’t know what he owes you because there’s no price on the thing. Basically, gift-giving is like indentured slavery or something. There’s no price, so you don’t know how much you owe. The commodity is the emotion… I did a piece called “More Love Hours Than Can Ever Be Repaid.” I said if each one of these toys took 600 hours to make then that’s 600 hours of love; and if I gave this to you, you owe me 600 hours of love; and that’s a lot. And if you can’t pay it back right away, [the interest] keeps accumulating… That’s more love than you could ever pay back. So what? You’re just fucked then.

Adorning both upper corners of “More Love Hours,” sheaves of dried Thanksgiving-style calico corn add a note of faux-nostalgic comfort to the tableau.

Accompanying “More Love Hours” like a sidekick wherever it’s displayed is “The Wages of Sin,” a small table overpopulated with thick, partly melted candles. In both of these pieces, a mass of items that are commonly given away as tokens of love, affection or friendship are piled together, as if unleashed, in a space that can barely contain them. The combined effect is disturbing, even frightening, enhanced by the soundtrack of a disturbed young man berating his mother from a nearby boom box.

After the L.A.-based Kelley committed suicide two years ago, “Love” and “Sin” served as the basis for an impromptu public shrine in an unused lot in Highland Park. Presumably the throngs of Kelley fans who showed up to fill the memorial space with candles, stuffed animals, and other gifts reckoned that with his passing Kelley would no longer be on the hook to requite this outpouring of love.

The original “More Love Hours Than Can Ever Be Repaid,” together with a new copy of the un-transportable “Wages of Sin,” are among over 250 items featured in the 22-room Kelley retrospective currently occupying the Geffen Contemporary at MOCA after previous showings in Amsterdam and New York. Much of Kelley’s work in this exhibition, like “More Love Hours,” punctures accepted notions of social and artistic propriety. In “Pay For Your Pleasure,” a corridor lined on both sides with more than 40 bright poster portraits of great artists, writers and philosophers are accompanied by quotations asserting the criminal or sinister nature of the creative enterprise. “From My Institution to Yours” juxtaposes the ostensible grandeur of a mock-classical art museum space with a series of dirty line drawings that bored workers might doodle and pass around. An entire room is devoted to Kelley’s “Kandors,” multi-colored, glow-in-the-dark miniature architectural models of the planet Krypton (yes, that planet Krypton) and its capital city. And tons more.

Early pieces include a series of deconstructed birdcages that Kelley built while still a student at CalArts. Numerous videos on view range from Banana Man, inspired by a minor character from the Captain Kangaroo children’s TV show, to the cryptic castration fantasy Blind Country that Kelley created in collaboration with Ericka Beckman.