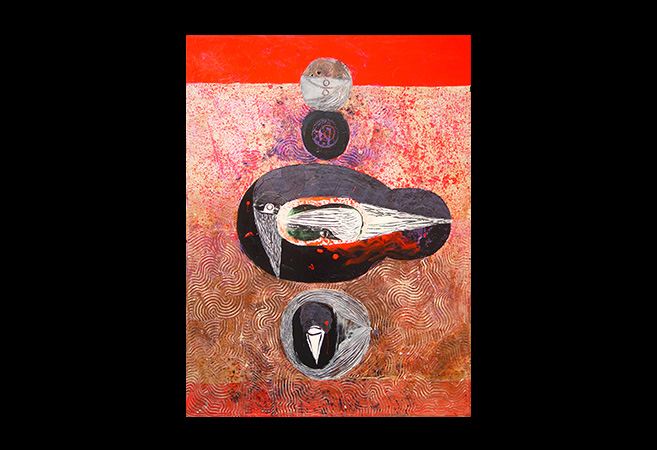 The vertically arranged central figures are what you notice first in Kamol Tassananchalee’s “Four Elements #1.” Like some of the other “Four Elements” paintings in the 70th birthday show of new work by the artist at the Brewery Annex, this one prominently features a nested bird in profile. Unlike the others in the series, though, a second, more diminutive bird also occupies a similarly comfortable berth just below the principal figure. Two additional, enigmatically representational orbs hover above.

As in nearly all of Tassananchalee’s paintings, the primary figures are merely a first point of entry into the spiritually and texturally lavish universe contained within the four corners of each composition, a universe that provides new and unexpected rewards with every look. The intricately swirling fingerprint-like grooves that surround the “elements” in the bottom half of the frame are a prominent Tassananchallee trademark. Even as these idiosyncratic brushstrokes largely recede from view in the upper regions of the picture, they fleetingly reappear in a surprising deep purple shade around the black circle near the top.

Raw daubs of paint abound within the grooves and around the figures in these paintings, creating constellations of color and abstract patterns that seem to lie on top of Tassanchallee’s dominant images. These spots and streaks often combine to create little, individually atmospheric worlds—all hiding in plain view around the canvas—in distinct counterpoint to the greater initial messages each piece imparts.

Kamol Tassananchalee is revered in Thailand as a National Artist, a cultural ambassador for his native country, even as he has made a second home in the United States since attending Los Angeles’s Otis Art Institute in the 1970s. He is also a permanent artist in residence with the Navajo Nation in Arizona, and his work actively commingles these disparate cultural influences.

In addition to the paintings, the current exhibition also features a room full of Tassananchalee’s recent prints and drawings as well as a series of whimsical metallic sculptures, one of which is a small-scale model of a 3-meter walk-in installation he is preparing to construct in Thailand.

“Kamol Tassananchalee: Celebrating The Artist’s 70th Birthday” is on view Thursdays through Sundays, from noon to 5 p.m., through January 30 at the Brewery Annex gallery, 650 A South Avenue 21, in Lincoln Heights.