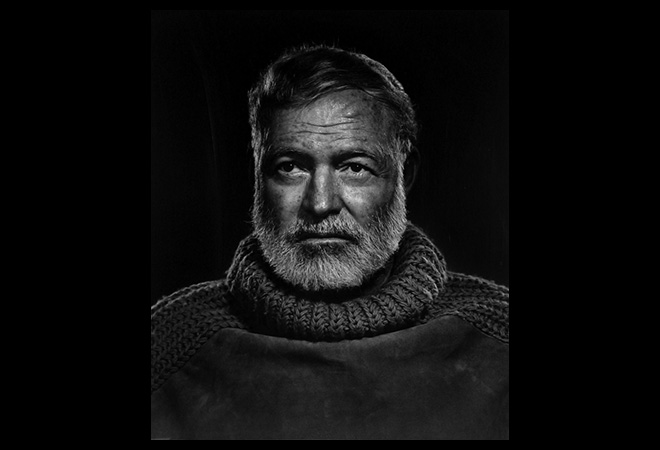 The popular image of “Papa” Ernest Hemingway garbed in a cable-knit fisherman’s sweater was introduced to the world in 1957, when the author sat for renowned Armenian-Canadian portrait photographer Yousuf Karsh at his home in Cuba. “I expected to meet… a composite of the heroes of his novels,” Karsh later recalled. “Instead, I found a man of peculiar gentleness, the shyest man I ever photographed—a man cruelly battered by life, but seemingly invincible.”

Hemingway is one of eight legendary figures dramatically photographed by the impossibly prolific Karsh. These image open the dazzling new “Portraits of the 20th Century” show at the Peter Fetterman Gallery in Santa Monica. Other Karsh subjects on view include Albert Einstein, Winston Churchill, Marc Chagall, Carl Jung, Georgia O’Keefe, and Ansel Adams.

This collection of 54 portraits of great men and women in art, politics, literature, sports, fashion, music, and other fields offers one highlight after another. Here’s Audrey Hepburn with her bicycle and her dog, Famous, on the Paramount back lot right next to a picture of Andy Warhol popping out of a New York City manhole cover flanked by Edie Sedgwick and Chuck Wein. Rounding a corner of the gallery’s second room, Malcolm X in Chicago leads to Simone de Beauvoir in Paris followed by Otto Frank revisiting the Anne Frank House in Amsterdam and Nelson Mandela in his old prison cell on Robbins Island. Elsewhere, a trio of Arnold Newman photos show Martha Graham at the barre, Igor Stravinsky at the grand piano, and Frank Lloyd Wright with architectural drawings of the Huntington Hartford Sports Club that was never built in Runyon Canyon.

Rolling Stone and Vanity Fair celebrity photographer Annie Leibovitz is represented by portraits of Mick Jagger, Mikhail Baryshnikov, and Michael Jordan as well as the architect Philip Johnson. One entire wall displays pictures by official JFK presidential campaign photographer Jacques Lowe, who died in May 2001, just months before his treasure trove of negatives stored in a vault at the World Trade Center was destroyed on 9/11. Martine Franck’s image of her husband Henri Cartier-Bresson drawing a self-portrait introduces Cartier-Bresson’s photos of Giacometti, Matisse, Truman Capote, and others. Hunter S. Thompson in Cozumel with a cigarette holder, in Al Satterwhite’s familiar photograph, somehow makes perfect company for playwrights Thornton Wilder and Tennessee Williams, French writer and performer Colette, and American writer Carson McCullers in an Irving Penn portrait.

A moving trio of Martin Luther King Jr. photos includes Dan Budnik’s famous picture, which was taken immediately after the “I Have a Dream” speech, which appeared on the cover of Time magazine, as well as separate photos taken of King with his wife and his son Dexter at the Montgomery, Alabama, airport.

All but two of the photos in the exhibition are in black and white, the exceptions being two 1958 Budnik portraits of Jasper Johns and Robert Rauschenberg, each posing with their work. And every one of the works on view offers a powerful, ineffable glimpse into the spirit of a 20th-century icon.

“Portraits of the 20th Century” runs through May at the Peter Fetterman Gallery.