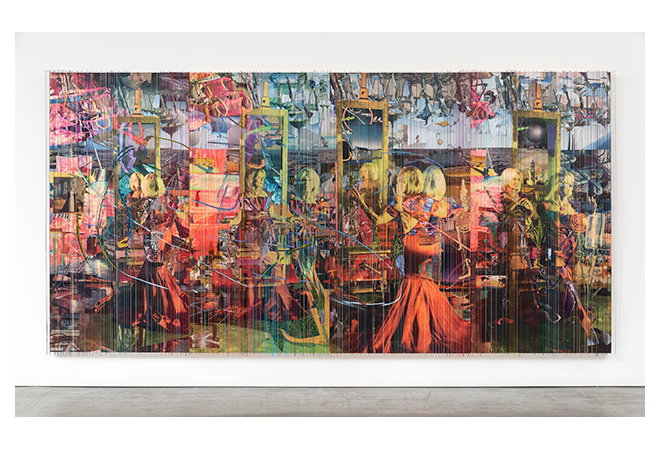 Like most pieces in the new Elliott Hundley exhibition at Regen Projects, “The Hesitant Hour” gets its title from a line in one of Rainer Maria Rilke’s Sonnets to Orpheus. Somewhat more than the others, this work also contains imagery based on a version of the Orpheus and Eurydice myth itself.

In Jean Cocteau’s Orpheus films, mirrors are passageways between our world and the underworld, between life and death. The series of four panels on view in the billboard-sized tableau show a dignified-looking woman (perhaps a latter-day embodiment of Eurydice) sitting at a mirror and then apparently reaching and stepping through it. These scenes of the woman with the mirror were staged and photographed by Hundley in his own studio. The images were then inkjet-printed onto gold leaf sheets and applied to the surface of “The Hesitant Hour.”

Though they are the most prominent elements in Hundley’s collage, the woman and the mirror share the eight-by-twelve foot space with an intense crowd of other images and colors. Some of these additional figures are the artist’s own painting, while others he found and placed on the work. No matter how closely a viewer may try to look at the picture’s surface, figuring out where one material ends and another begins is virtually impossible.

Anyone who engages with “The Hesitant Hour” also becomes aware that the image exists at a definitive remove from the realm where viewers stand and contemplate it. Hanging down from pins running across the top of the piece, a colorful string curtain mediates our impression of the content. The strings don’t fully block our view, but they do create a veil between the viewer and the work.

Quite a few of the pieces that Hundley created for this show have unusual features that create surprising effects. Residing on a wall directly across from “The Hesitant Hour,” much of the equally large “Destroyer” seems to glitter on its surface. But what look like lights or sparkles are actually shiny pinheads sticking out of the work like so many acupuncture needles.

Rather than canvas or linen, several of Hundley’s pieces use hardened foam as a support medium. The material has allowed him to add physical depth to these pictures, cutting into the works’ surfaces to create an intriguing three-dimensionality. In “the sound of its own ringing,” it looks like a thrown object has ripped a hole in the center of the collage; web-like cracks emanating from the center resemble a shattered window. Five intricately crafted bronze sculptures situated around the gallery floor also add to the fascination of this idiosyncratic, compelling show.