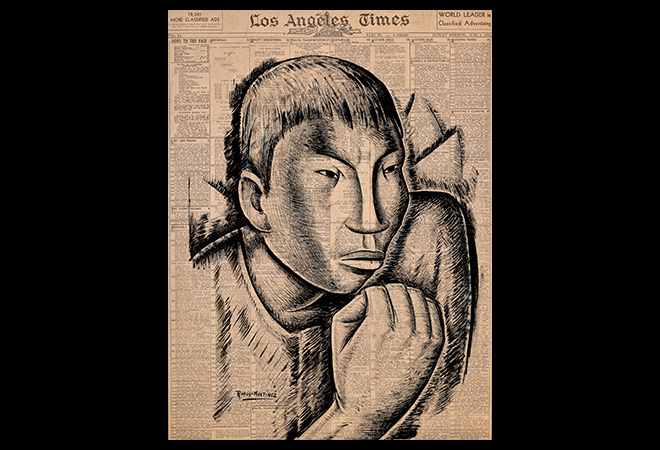 The clenched fist and combative glare of the unnamed subject in Alfredo Ramos Martínez’s 1932 portrait “El Defensor” (“The Protector”) imbue the image with more political overtones than most of the works in the Pasadena Museum of California Art’s new exhibition, which showcases work by and relating to Martínez during his Los Angeles sojourn from 1929 to 1946. One reason for the turn toward thematic militancy may have been that around the time this drawing was created, Martínez was frequently in the company of his visiting friend David Alfaro Siqueiros, the great Mexican artist and agitator (whose incendiary Olvera Street mural was unveiled in 2012—80 years after it was painted). Also visible behind the young man in “El Defensor” are maguey plants, native to the Mexican homeland that Martínez recalled with intense passion and high sentiment in much of the art he made while living north of the border.

Like several other Martínez pieces in this show, “El Defensor” was composed not on a white or blank sheet of paper, but directly on a printed newspaper page, here the Los Angeles Times. Martínez usually favored the Classifieds as the backdrop for his drawings, perhaps because their rigid vertical columns provided a contrast to the vivid human forms he drew on top of them. There’s also an obvious contrast between the intensely soulful subjects in these portraits and the banality of the words on the pages they occupy. In “El Defensor,” the printed text underlying the image of a young man who looks ready to fight features beauty tips and ads for repair services. An additional irony, likely evident to the drawing’s original viewers, was that during the 1930s, the Times had taken a strong editorial position favoring the forced repatriation of Mexican migrant workers like this proud “protector.”

The dozens of paintings, drawings and other works on view at the PMCA are presented in four broad thematic groupings—“Los Angeles Stories,” “Many Women,” “Religious Inspiration,” and “Forever Mexico”—though plenty of the images overlap these categories. Unlike some of his contemporaries—including “los tres grandes” of Mexican muralism, Diego Rivera, Jose Clemente Orozco, and Siqueiros—Martínez easily married his modernist aesthetic to a traditional Catholic religious sensibility. The show also includes a few works by other artists, including Mexican-French painter Jean Charlot, which were selected by exhibition curator Amy Galpin for the perspective they provide on Martínez’s work.

Two additional, concurrently running shows in adjoining PMCA galleries also complement the Martínez exhibition. Flora Kao’s Homestead installation evokes the desolation of long-deserted residential shacks in the Mojave Desert, as life-size fabric rubbings hanging from the ceiling and surrounding the museum’s small Project Room recreate the four walls of these structures. And Serigrafía displays 30 silkscreened prints of Latino-themed agitprop posters, some distinctly vintage and some more recent; they include the announcement of a 1970 La Raza anti-war rally in east L.A. and encompass a range of messages, familiar and forgotten.

Picturing Mexico: Alfredo Ramos Martínez in California, along with Flora Kao: Homestead and Serigrafía, run through April 20 at the Pasadena Museum of California Art.

Just in Time: The Brilliant Career of Josef Koudelka