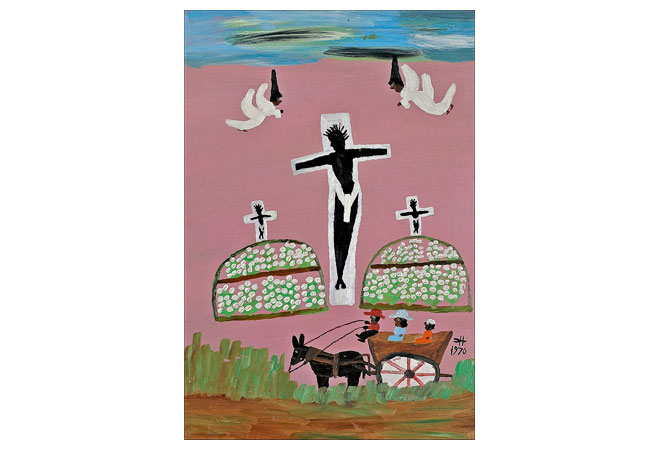 "Cotton Crucifixion" by Clementine Hunter (1970); oil on board; from the collection of Gordon W. Bailey

Clementine Hunter (1886/7 – 1988) didn’t take up painting until she was in her 50s, having spent the first part of her life laboring on Louisiana plantations. After working in the cotton fields as a girl and young woman, she took a household domestic position; it allowed her to discover an artistic talent and ultimately to forge a career that has elicited comparisons to popular folk artist Grandma Moses. Though never duly rewarded while she was alive, Hunter today is regarded as something of a historical icon in her home state. Earlier this year, she was even the subject of a new Robert Wilson-directed opera, Zinnias.

Hunter’s “Cotton Crucifixion” is one of the most powerful works in the wonderful Soul Stirring exhibition, which opens this week at the California African American Museum. While all of Hunter’s paintings recall the deprivations and the incidental joys of life as an impoverished plantation hand, the spiritual statement this piece makes is especially strong. She actually created several paintings centered around a black Jesus on the cross flanked by a pair of floating angels, but the one on display here places the image of holy redemption right in the cotton fields themselves, a domain where generations of slaves and their descendants experienced many of the harshest brutalities. Barely making room for the sky above, Hunter’s painting grounds this icon of religious transcendence in the narrative of her community’s—and her own—earthly hardships.

All eight of the self-taught African American artists (five men and three women) represented in Soul Stirring lived and worked in the American South. Many of their pictures in this show were made with the most rudimentary materials: corrugated roofing tin or old wooden doors instead of canvas and house paint instead of oils. None of them approached the project of picture-making with any careerist expectations or anticipation of market rewards. What exudes from the walls at CAAM, though, is the drive to create.

Many of the works impart religious messages or moral instruction. Leroy Almon’s painted wooden bas-reliefs “Death” and “Devil Fishing” warn against the wages of sin while a Roy Ferdinand self-portrait features the artist raising a middle finger to the three vices of sex, drugs, and alcohol loitering in front of his house. Handwritten biblical passages surrounding the figures in Sister Gertrude Morgan’s works on paper testify to her missionary fervor while Herbert Singleton’s images of an attempted lynching, a New Orleans funeral, and Martin Luther King’s peaceful resistance stir the conscience as well as the soul.

Other artists seek to chronicle their communities of origin. Several of Sam Doyle’s portraits celebrate the achievements of prominent figures in the Gullah community of St. Helena Island off the coast of South Carolina, while the Rauschenbergian tableaux of Purvis Young unsentimentally showcase the tough Overtown neighborhood which produced him. A series of psychedelically colorful, categorization-defying compositions by Nellie Mae Rowe, depicting scenes of domestic tranquility in her native Georgia, rounds out the exhibition with a kind of spiritual balm.