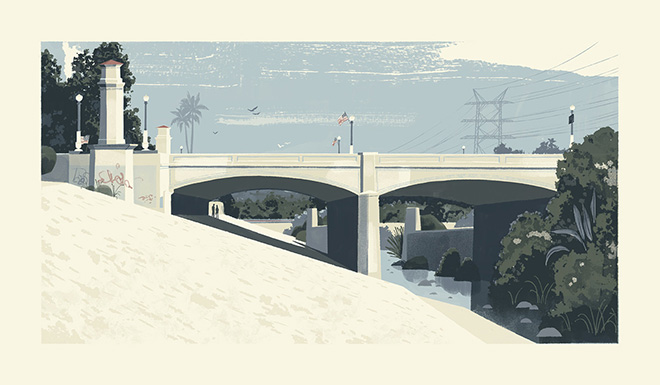 Connecting the city of Glendale to the Atwater Village neighborhood of L.A. city, the Hyperion Bridge (commonly known as the Glendale-Hyperion Bridge) has served as a traffic and pedestrian crossing for the Los Angeles River since the 1930s. The once-naturally flowing river now travels a 52-mile course through an artificial channel from Canoga Park in the San Fernando Valley past downtown L.A., Lynwood, and Compton and ultimately to Long Beach, where it empties into the Pacific Ocean. Along the way it creates a series of distinctive wildlife habitats. Los Angeles artist Chris Turnham’s screenprint of the Hyperion Bridge beautifully depicts this particular locale as a place that’s very much of the city as well as a respite from it hiding in plain sight.

Although no traffic is seen on the bridge, the marks of human activity are everywhere from the streetlamps (some adorned with American flags) that line the bridge to the graffiti tags conspicuously sprayed on the side of it to the telephone wires that run parallel to the river. In the deep shadow of the bridge’s overpass, two indistinct human figures stand on the sloping concrete embankment conducting a private, perhaps romantic transaction. At the same time, an array of plants, shrubs, and other vegetation grow tranquilly in the river below as the mighty Verdugo mountains loom in the background.

“L.A. River and Hyperion Bridge” is one of about 20 prints viewable on Turnham’s Tumblr site. His work is devoted to capturing the distinctive architectural spirit of particular Los Angeles spots in such easterly neighborhoods as Los Feliz (where the artist lives), Silver Lake, Eagle Rock, Highland Park, and the Griffith Park area. Turnham moved to L.A. from Portland, Oregon about three years ago. He says the variety of residential and commercial architecture he encountered in this part of town, where different styles and structural ideas are on display even from one home to the next, “blew my mind.”

It wasn’t long then before he began taking iPhone pictures of his favorite buildings and recreating the snapshots in limited edition screenprints. Because screenprinting involves layering individual colors one at a time, Turnham typically limits each print to no more than six or seven colors. The resulting blocks of color that characterize the final images lend the works an exaggeratedly “graphic” effect. It says a lot about the impression this city has made on him, Turnham suggests, that he was inspired to use the technique only once he arrived in Los Angeles.

The 31-year old Turnham’s professional origins are in feature animation, and he has developed architectural backgrounds and set designs for the films Coraline, Paranorman, and Cloudy with a Chance of Meatballs 2 as well as a Power Puff Girls special for the Cartoon Network. He’s currently working on his first children’s book. His ambition is also ultimately to create a book illustrating the Los Angeles neighborhoods that have captivated him—most of which he believes are not as well known as they should be outside the region—and the mid-century children’s book illustrators he cites as artistic influences include the great visual chronicler of cities Miroslav Sasek (who never did do a book on L.A., actually.)

In addition to his Los Angeles pieces, Turnham’s prints present an appealing hodgepodge of images from other locales, literary illustrations, images from nature. and other miscellanea.