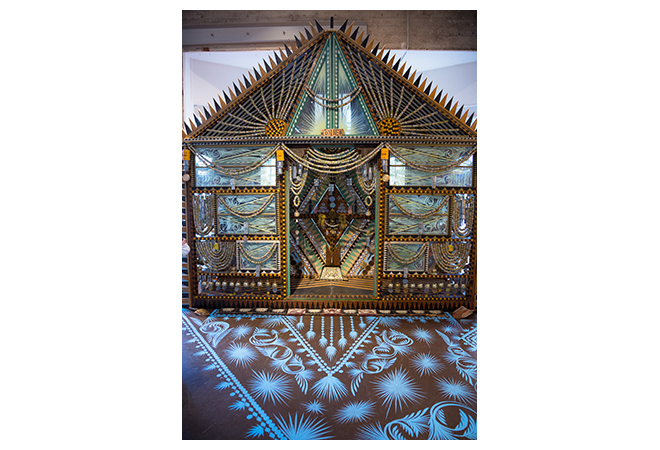 Photo by Noel Bass, courtesy of the Craft and Folk Art Museum

Stroll by the Craft and Folk Art Museum on Miracle Mile and you’ll see one of its two huge front windows occupied by L.A.-based installation artist Shrine’s gorgeously ornate Empire of Love Shack. Painstakingly decorated the wall-sized wooden plank features a panoply of elaborate patterns made largely out of beer bottle caps, metal cans, plastic bottles, and other household items, all of which are interspersed with intricately painted designs. Each feature elicits considerable fascination on its own, but the overall effect is almost mesmerizing.

Then you walk into the museum and realize that all you saw from the Wilshire Boulevard sidewalk was the back wall of a free-standing walk-in structure, “a house inside a house,” that Shrine has assembled in CAFAM’s lobby. Impressive as it looked through the window, this stunning work beckons you not simply to contemplate it but to enter and experience it from all sides. More than an objet d’art, this Empire of Love Shack is a place.

Standing inside the edifice, or even just peering in through its open portal or painted glass windows, you might be inspired to think of the place as a sort of temple or sacred space. Shrine, himself, though, rejects all such lofty designations, insisting that it really is what he calls it, a “shack.” He built the structure over the course of ten days (a little less time than he usually gives himself), unguided by any preliminary plans or architectural renderings, “like a kids’ fort.”

The building’s frame is made out of wood that Shrine had carted off from a Habitat for Humanity site, and most of the raw materials that lavishly adorn it were also discarded objects. Some of these he found in recycling bins; others were donated by people who knew he could use them. The antique books lined end to end on the floor in front of the shack’s façade he took from his grandmother’s house, where he’d seen them on the bookshelf his entire childhood without ever even thinking to open them.

Part of the museum lobby’s floor also features a dynamic abstract painting in blue by Shrine (né Brent Spears), almost like a mural, which leads up to the structure itself. A wall next to the shack displays various materials culled by the artist: pictures and messages drawn on individual scraps of paper, cardboard and metal that he tends to create while traveling, paintbrushes, tortilla makers and other apparently random objects arranged in a composition of counter-intuitively striking harmony.

The Empire of Love Shack artistic project, Shrine asserts, was born of a “feeling, not an intellectual process.” Although some of its elements evince a slight Moroccan influence, the work was not conceived as a “nod toward any specific culture.” Its open doorway, heralded by the word “Lover” printed in Gothic lettering on the back of a metal sign someone had thrown away, conveys the universal “feeling of a heart opening up.” Seeing “trash transformed into something beautiful,” the artist suggests, may just make it a little easier for someone to “take a bad experience and turn it into something inspirational.”