Home Art FRAMED: An Architectural Sleeve of Glass and Grass for the NHM That... 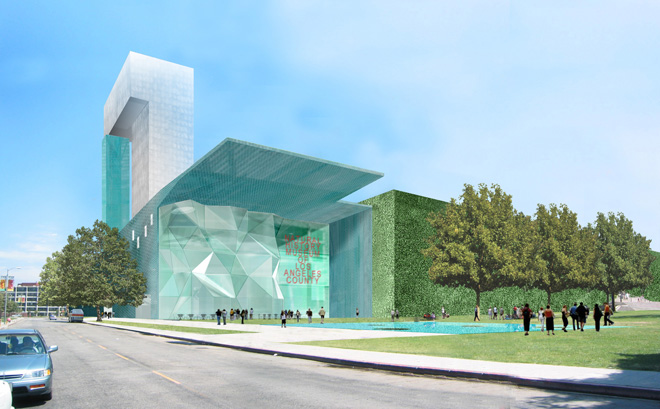 Just over a decade ago, architect Steven Holl designed a new building of glass and grass for the Natural History Museum of Los Angeles. It was supposed to surround the original 1913 Beaux Arts structure like a “sleeve,” and the enhanced facility was to include an observation tower, a park, a public plaza, a rooftop science garden, and a copper canopy jutting out toward Exposition Park. The completed facade could have been a new landmark on the L.A. cityscape, but like all the project photographs, designs, and models currently on display in the A+D: Architecture and Design Museum, the structure was never built.

Unsurprisingly, many of the initiatives in the Never Built: Los Angeles exhibition were doomed by insufficient funds. The Natural History Museum upgrade, for instance, was done in when the public rejected a bond to seismically retrofit the revamped structure and a capital campaign to realize the project was abandoned. Other ventures encountered active resistance from groups with social and political agendas. The futuristic Frank Lloyd Wright-designed Huntington Hartford Sports Club, which would have enclosed extensive resort facilities in three gigantic concrete and glass saucers on 130 acres in Runyon Canyon, was staved off by old-fashioned neighborhood NIMBYism in the late 1940s. In 1950 the massive Elysian Park Heights public housing project envisioned by Richard Neutra and Robert Alexander, including 24 thirteen-story towers and 163 two-story garden apartment buildings, was branded a commie plot. A dozen or so years later, the area where these residences would have gone up would be used for Dodger Stadium.

The traffic congestion L.A. is known for today might have been preempted by any of several alternative transportation ideas bandied about at different moments in the 20th century. As early as 1936, Joseph Strauss proposed an air tram offering “the speed of the airplane, the comfort and quiet of the automobile.” A freeway system mapped out in 1958 would have covered the Southland in a much denser network of high-speed roads than we currently have, and a four-line mid-century subway system proved unfundable. An innovative overhead monorail also never got off the ground. Samuel Lunden’s mid-’60s “carveyor” invention featured elevated moving sidewalks; “people movers” in the ’70s would have had small automated cars floating on an air cushion around a three-mile circuit in downtown LA. Morphosis Architects‘ 1998 plan for a pedestrian bridge over the 101 included an electronic Jenny Holzer billboard.

Never Built also showcases several cool-looking individual projects that never happened including Jean Nouvel’s 45-story “Green Blade” tower in Century City, proposed only a few years ago, with hydroponic hanging facades on two sides (desert flora facing south and Mediterranean plants to the north). Unfortunately the developer had overpaid for the land, and the whole thing ended up in bankruptcy. A Cal State Long Beach art museum would have had a real, working oil derrick pumping away right in the heart of the campus. And just imagine if, in 1952, Walt Disney’s original conception of a Disneyland not “intended as a commercial venture,” complete with bird sanctuary and active railroad, had been accepted by the Burbank City Council instead of shunted off to Anaheim.

“Never Built: Los Angeles” continues through October 13 at the Los Angeles Architecture and Design Museum, 6032 Wilshire Boulevard, across from LACMA.