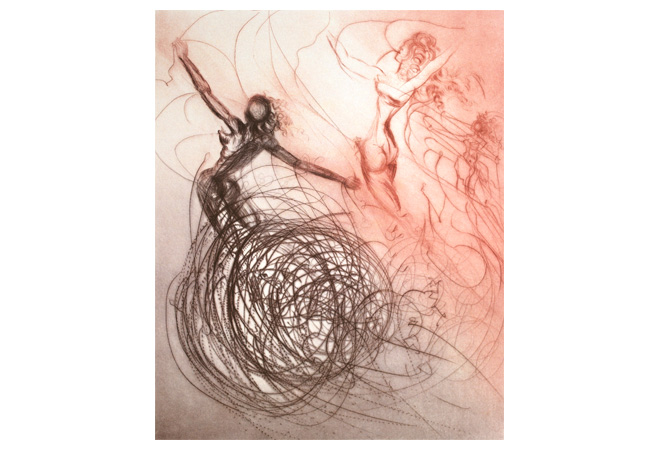 Standing before Salvador Dalí’s “Women in the Waves,” one of over 80 copper etchings by the iconic Catalan surrealist on view this weekend at Gallery 319 in Woodland Hills, Christine Argillet has a story to tell. In 1969 her father, Pierre Argillet, a close friend of Dalí as well as an early collector and longtime publisher of his prints, had arranged a Paris media event where an audience was invited to watch the artist at work. In front of the assembled VIPs, Dalí incised the tangled circle at the left foreground of the image—and nothing more—into the metal plate before petulantly declaring his creation was finished. Embarrassed by this uncharacteristic display of indolence, Pierre became furious, threatening to sever their relationship and even to cut off Dalí’s famous mustache. But Dalí insisted he was done and that was that.

A few days later, Dalí summoned Argillet and his teenage daughter to his hotel, where he apologized profusely to his friend. Apparently, Dalí had recently been in communication with one of his American admirers, Dr. Timothy Leary, who had urged him to experiment with LSD. “And I did!” the normally drug- and alcohol-abstaining artist acknowledged. “I don’t even remember what happened that night.” Not long after, Dalí added three ethereal, free-spirited female figures and additional elements to the image. What had started as a bad acid trip was transformed into an eternally enigmatic picture.

And, yes, you read that right. The extensive exhibition of Dalí prints from the Pierre Argillet collection, which was curated by his daughter Christine, is currently on public display in Woodland Hills. The western San Fernando Valley burg is some distance away from the usual loci of art and commerce, and the gallery itself is tucked into a run-of-the-mill strip mall across from an El Pollo Loco.

The gallery’s unlikely location doesn’t detract from the spectacular array of Dalí’s work hanging on its walls. “Women in the Waves” is one of six pieces from the ’60s and ’70s depicting “hippies” as the artist observed them in the Nepalese capital of Kathmandu, where throngs of young western spiritual seekers evoked imaginative comparisons to medieval religious pilgrims. Other thematic series in the show include etchings that Dalí created on spec for an illustrated edition of the poems of Mao Zedong, as well as groups of images inspired by literary works of Goethe, Apollinaire, Sacher-Masoch, and Ronsard. A cluster of bullfight pictures seems to challenge Picasso’s idealized representations of this most brutal blood sport. And an extraordinary set of works depicting scenes from mythology all incorporate a conspicuous blotch where Dalí had splashed corrosive acid onto the copper plate as part of the etching process.

In addition to the dozens of framed prints, the exhibition includes three large tapestries designed by Dalí and an extraordinary bound tome containing his illustrations of Lautréamont’s poetic novel “Songs of Maldoror.”

“Dalí: The Argillet Collection” opens today and runs through Sunday at Gallery 319, 19720 Ventura Boulevard, in Woodland Hills. Some works will remain on display at the gallery for a few weeks afterward.