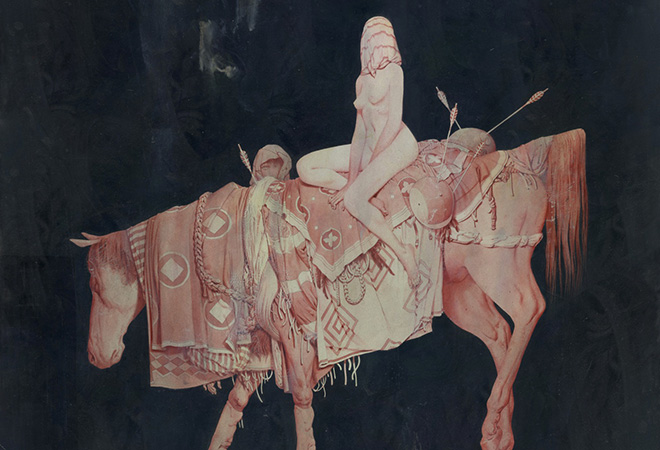 In the legend of Lady Godiva, a noblewoman is dared by her husband to ride naked on a horse down the central street of a medieval English town in order to win relief for the local population from his oppressive tax regime. Her body partially covered only by her long hair, Godiva’s modesty is preserved by the townspeople on whose behalf she has undertaken this stunt; they all remain indoors with their windows shuttered to avoid seeing her with the exception of a single voyeur, the original “peeping Tom.”

Joao Ruas’s acrylic-on-wood painting “Godiva” both preserves and recreates the essence of this apocryphal story by placing it within the context of a fantastical alternate world glimpsed in more than a dozen pieces in his new show, VERSO, at Thinkspace Gallery in Culver City. The first thing you see on the wall in front of you when entering the room is an actual arrow sticking out of a diamond-shaped target. Both the arrows and this variation on the target symbol appear repeatedly in the VERSO universe, surprising the viewer on each new encounter until one finds “Godiva” near the back of the gallery, where these elements reach the apotheosis of their symbolic potency.

The Lady Godiva in this arresting picture is under attack: The helmets (another recurring motif here) that her horse is carrying have been hit by arrows fired by some unknown assailants. One of the blankets adorning the animal also features the distinctive diamond target symbol that unites the riding woman with many of the figures appearing in Ruas’s other works. The mysterious, barely visible young man lurking dangerously close behind them, appears to be an especially menacing ogler.

Most striking of all, though, is the wrapping of Lady Godiva’s entire head and hair in the uncomfortably recognizable hood used in our own day to achieve the submission of tortured prisoners of war at Guantanamo, Abu Ghraib, and elsewhere.

This juxtaposition of contemporary and ancient themes and of images evoking incongruous cultural archetypes is hallmark of the young Brazilian painter. Together in one room, these paintings, drawings, photographs, lightboxes, and wall projections suggest a documentarian’s rendering of a given civilization in a state of constant vigilance—though the particular civilization on view is one entirely of the artist’s own creation.

“Emotions, relationships, war: It’s all part of being alive,” Ruas says in describing his latest show at Thinkspace. “Peace? It’s for the dead.” With or without these criteria as an indicator, “Godiva” and its companion works in VERSO are irrepressibly vivid symbols of a battle-scarred psychological landscape.

Joao Ruas’s VERSO is at the Thinkspace Gallery through February 22.