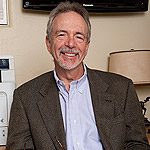 Robert Rotstein’s first novel, Corrupt Practices (which came out June 4th), is a realization of the old adage “write what you know.” The L.A.-based entertainment attorney introduces us to L.A.-based Parker Stern (also a lawyer), whose golden-boy career comes crashing down in the wake of his mentor’s suicide. Here Rotstein tells us how he managed to extract fiction out of fact, why L.A. was the perfect backdrop for this legal thriller, and what we can expect to see next from Parker Stern. The protagonist of Corrupt Practices, down-and-out attorney Parker Stern, shares a profession with you. Though the book is fiction, did you find your own experiences inadvertently seeping into the narrative?
I do use some of my own experiences, though most of the time intentionally (I hope!). For Corrupt Practices, I took some incidents from my professional career and then fictionalized them extensively. For example, the book begins with the death of a prominent Beverly Hills attorney. That incident is loosely based on the actual, shocking suicide of a former high-powered partner in my firm in the early 1980s. I combined that occurrence with a second event inspired by real-life events. In the novel, Parker Stern’s former colleague is arrested for embezzling from his client. Two former colleagues of mine were jailed for allegedly doing just that in separate incidents. When I combined the embezzlement idea with the unfortunate death of the former partner, I had the germ of Corrupt Practices.

The Church Of the Sanctified Assembly that you describe in the book sounds eerily similar to the Church of Scientology. Seeing as you grew up in Los Angeles, did the Scientology culture that is so prevalent here play a role in your research or your inspiration?
The cult in Corrupt Practices is completely fictional. I researched a number of different cults and religions going back centuries, and then in the writing process combined that information, along with my imagination, to come up with the Assembly. However, as an L.A. native, I’ve always been interested in the seemingly indigenous Southland religious movements, many of which seem to be part of Hollywood culture. I’ve for many years been fascinated with the story of L.A. faith-healing evangelist Aimee Semple McPherson, who in the 1920s and 30s built the Angelus Temple. McPherson pioneered the use of the media to spread her gospel, became a Hollywood star, and might have staged her own kidnapping to cover up plastic surgery, an abortion—or maybe just for publicity. Kathryn Kuhlman, Herbert Armstrong, and his son Garner Ted seemed ubiquitous on weekend local TV stations. So, while the Church of the Sanctified Assembly isn’t real, it does have a distinctly L.A. flavor.

Why did you choose to set the story in Los Angeles as opposed to any other city? What is it about L.A. that you felt helped to sustain, bolster, or add credibility to the novel?
In a sense, Los Angeles is a character in Corrupt Practices. L.A. is, geographically and culturally, an illogical city—accidental sprawl rather than planned verticality. It’s also still a relatively new city, its history as a major urban center measured in decades, not centuries. While all cities have a gritty side, L.A.’s grit is less polished than that of cities like New York, Chicago, Boston, and San Francisco. Maybe that’s why it’s the setting for so many noir novels—and Corrupt Practices has a noir feel.

What’s next for Parker Stern?
I’m currently working on the next Parker Stern novel. A reclusive, iconoclastic video game developer known to the world only as “Poniard” has released an online game that charges a Hollywood tycoon with the 1987 abduction and murder of an actress. Poniard hires Parker to defend him in the tycoon’s libel lawsuit. When Parker starts investigating the actress’s disappearance, he starts uncovering secrets that very dangerous people want to keep hidden.

Robert Rotstein will be signing copies of Corrupt Practices this Sunday, June 30, at Book’em Mysteries in Pasadena.