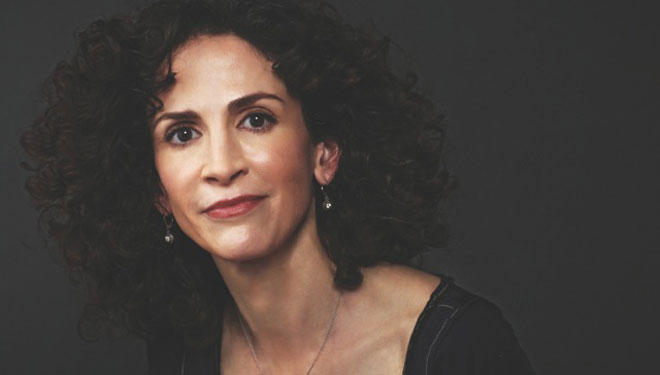 Los Angeles-bred and New York-based Juliann Garey’s first novel, Too Bright to Hear Too Loud to See, centers on Greyson Todd, a Hollywood studio exec who has hidden his bipolar disorder for two decades. His story unfolds as he undergoes electroshock treatment. Garey, who has lived for over 20 years in New York but has yet to adjust to the weather, chatted with us about bipolar disorder, yoga, and her novel, which came out on December 26.

Where in Los Angeles did you grow up?
I grew up in West Los Angeles. I moved around a little bit. I went to Beverly Hills High School. I spent the longest period south of Olympic, next to Roxbury Park. I grew up “south of the tracks.” I went to school with a lot of people who are running Hollywood now. I’m not one of them. [Laughs]

You edited a nonfiction anthology on mental illness. Why did you decide to explore this further in your fiction?
It runs in my family, bipolar disorder. I’ve got it all over the place. It’s a leaking faucet. I have bipolar disorder. My father had it — some kind of medicine-induced mania that ended in suicide. Five suicides in two generations in my family. It was a natural subject for me to write about. It goes back to the ancient saying about writing what you know. It started as a short story in a fiction class. It wasn’t even about mental illness, I was writing the childhood section of the book. I imagined what my father’s childhood was like. He died when I was 16. I kept going and writing about those characters. It kept spinning from there.

The structure of the novel—with three story lines that unfold during the main character’s electroshock treatment in a psychiatric facility—is unusual. How did you devise it?
For years, for literally years and years, I could not come up with a structure. It was all in pieces. I was hospitalized in 2009, and I was supposed to have electroshock treatment but was turned down as a candidate. As a writer, I was afraid of memory loss. My memory is as bad as it is! I observed a lot of patients having ECT. When I got out, I was in a yoga class and I thought of the structure. Yoga and the shower are the two places I end up solving these problems.

At that point, how much of the book was already written?
I had written a lot of it. I don’t know how many pages. I tried it chronologically, I tried different things. The truth is that I’ve always been obsessed with writing about memory since I read Proust in college. Proust writes about things coming back to us in pieces. That electroshock would bring back pieces to Greyson was the most organic way to structure it. I had a seven-year-long bipolar episode while I wrote the book. What Greyson was going through was a lot of what I was going through.