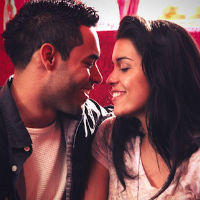 Filled with the tropes of teen dramas—grade anxiety, romantic relationships, drug abuse, jealousy—Hulu series East Los High kicks off its second season today. Set at the fictional East Los Angeles High School, what separates East Los High from similar shows (apart from the fact that the cast is entirely Latino) is the way it depicts teenagers’ daily triumphs and struggles, big and small. Considering that creators Carlos Portugal and Kathleen Bedoya developed the series with a grant from the Population Media Center to spread awareness about teen pregnancy, East Los High doesn’t get preachy. Instead, the series is a mix of social awareness and sexy melodrama. It’s also a showcase for emerging bands and musicians.

Sanchia – “So What”
New York City’s Sanchia is behind the super catchy “So What,” East Los High’s theme song. The producers of the show kept it for the second season. Smart move. Few tracks scream hot and sweaty summer dance party the way this one does.

Lex Lu – “Turn Me Up”
Lex Lu describes herself on her Facebook page as a “rapper/singer/dancer/professional gum chewer/fro tamer.” California born and bred Lu (real name: Alexis Boyd) is a rapper who currently lives in L.A. and just released her first album, The Adventures of Lex Lu, which features more twerkable tunes than are safe for consumption. We have high hopes for this one.

Crooked Stilo – “La Charanga”
Crooked Stilo have been around for a while, but the duo deserves mention. Brothers Victor and Johnny Lopez have been dispensing upbeat Latin-infused hip-hop since the early ’90s. Strap yourself in for this Cumbia-laden rapstravaganza.