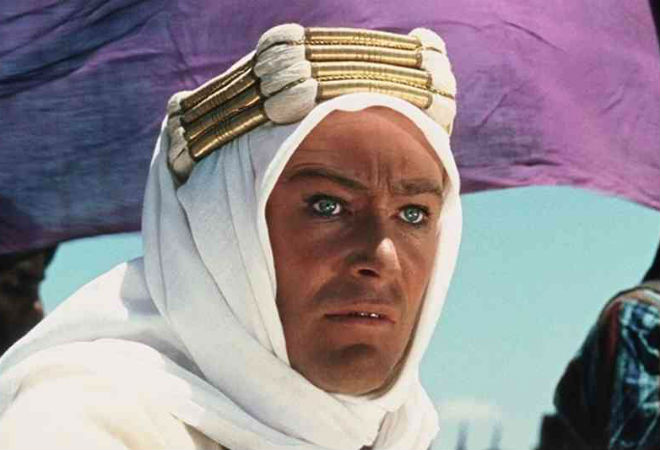 Before joining Richard Burton, Richard Harris, and Oliver Reed at the Great Pub in the Sky at age 81 on Saturday, Peter O’Toole lived a life that was intoxicatingly entertaining. “I will not be a common man because it is my right to be an uncommon man,” a teenage O’Toole declared in a notebook. “I will stir the smooth sands of monotony.” Many of his finest screen roles were glorious studies in at once invulnerable and all-too-sensitive characters stirring up those sands, disrupting the status quo, puncturing the everyday with some form of idealism, surrealism, or vandalism—Lawrence of Arabia, The Ruling Class, The Stunt Man, My Favorite Year. Celebrated as a raconteur and a sybarite, O’Toole once enforced this house rule: “Fornication, madness, murder, drunkenness, shouting, shrieking, leaping polite conversation, and the breaking of bones, such jollities constitute acceptable behaviour, but no acting allowed.” From his youth, he also adored rugby and cricket and even became a cricket coach to his son Lorcan (Irish for “Lawrence”) in his later years.

In 1992, the actor published the first volume of his memoir Loitering With Intent. This is no boilerplate autobiography; this is O’Toole’s Speak, Memory. Well before Bob Dylan’s Chronicles or Neil Young’s Waging Heavy Peace, O’Toole’s remembrances were penned not to answer questions for his fans but entirely on the author’s own terms. They are rambles through time by a performer blessed with keen powers of observation and an immense love for storytelling. Although there is some drinking to be found, such as one mention of O’Toole’s mind being “purged by a mouthful of bitter ale in the company of a delinquent fellow spirit,” those who seek a book of carousing tales or a Hollywood tell-all will be dissatisfied. The second volume, The Apprentice, published in 1997, depicts O’Toole’s time as a student at the Royal Academy of Dramatic Art, concluding in the 1950s before he had barely trod the boards on the professional stage much less ascended to the silver screen.

Anyone who picks up the first volume, The Child, will be astonished to discover how much O’Toole writes about Adolf Hitler or, as he sometimes refers to him, “little Alf,” and juxtaposes his own childhood with that of the Fuhrer’s. Hitler unquestionably haunts the young O’Toole and not simply because he came of age during wartime. Although O’Toole never draws these comparisons in the book, it’s difficult not to recall some of the self-obsessed and imperious characters he would later go on to portray. Hitler is the epitome of evil but also the first dramatic character that the young boy studies even before realizing he will be an actor. When he writes of how Hitler was shaped by WWI, how it “saved his nervous, frightened life, nurtured it, disciplined it, gave it personality, esteem, a legend and a voice,” there are parallels to the refuge O’Toole found on stage and screen.

O’Toole retired from acting last year but he was said to have been working on the next installment of Loitering With Intent. It is unlikely we will see a third volume and if it is released, it will be different than if O’Toole had lived to complete it. Whatever else he may have wished to tell us about his extraordinary career-making portrayal of T.E. Lawrence beyond the talk-show anecdote about the brandy and milk he and Omar Sharif consumed to steel themselves for the filming of the charge at Aqaba is now lost. Whatever theories O’Toole may have concocted about the content or the recitation of Shakespeare’s sonnets—he claimed he had committed all 154 of them to memory—he likely took them with him to his grave. Behind all of his revelry lurked a consummate actor with a lifelong fascination for the gift of gab and all that it unlocked, an actor full of turbulent intensity but also vulnerability and compassion. O’Toole was a very bad boy but a very good man.