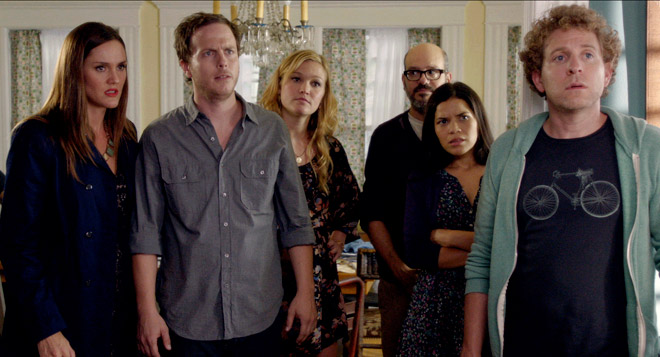 There are no bomb shelters or flesh-eating zombies but there’s plenty of awkwardness, bickering, and sexual tension when the eschaton presents itself—during brunch, no less—in Todd Berger’s latest film It’s a Disaster. With an ensemble cast anchored by David Cross, Julia Stiles, and America Ferrera, the writer/director’s second feature revolves around four couples expecting a pleasant, Sunday morning sit-down. Before the quiche gets to the table, a neighbor shows up at the front door, HazMat suit and all, to announce that dozens of dirty bombs have been dropped on downtown. Filled with smart, punchy dialogue It’s a Disaster steers away from the hero-driven antics of mainstream doomsday flicks in favor of a realistic unspooling of catastrophes.

The apocalyptic comedy comes out today on VOD and digital platforms and will hit theaters on April 12. Leading up to its premiere, the film’s distributors, Oscilloscope, have been bootlegging select scenes and dropping teasers, in the form of six-second Vine clips, on social media (search #itsadisaster on Twitter). We nabbed Berger, the man behind the megaclysm, for a chat about brunches, filmmaking, and hanging out in a semi-famous murder house.

Los Angeles: What made you want to pursue this kind of movie? Have you had bad brunch experiences in the past?
TB: I’m not a fan of couples’ gatherings whether it’s brunches or game nights. They can be awkward—especially if you’re in David [Cross’] position of just starting to date someone and there are these three other couples who are all married or have been together forever.

LA: Where did the doomsday idea come from?
TB: I had this idea that it would be funny to take Night of the Living Dead and keep all the zombie footage then shoot a bunch of new footage in black and white and make it look old, as if it’s a movie about a bunch of couples that get together for a board game night in 1968, like Mad Men style—but then there’s a zombie invasion!

LA: This idea changed, obviously…
TB: After watching Night of the Living Dead again, I realized how hard that would be. But I really liked the idea of a bunch of couples getting together and then something horrible happens outside that makes it impossible for them to leave.

LA: Were there any filmmaking obstacles in having the cast holed up in the house?
TB: The actual writing process was easy, because they can’t go anywhere. I wrote it basically to be cheap. But we had to think about how to make every scene look and feel different and have the characters and story be so interesting that you don’t mind, 45 minutes in, realizing that you’re not going to leave this house.

LA: You guys must have been basically living at that house.
TB: Instead of renting trailers we actually had the idea of: Why don’t we rent a house in the neighborhood, where all the actors can hang out? We ended up renting this mansion across the street, which turned out to be the house where Marvin Gaye was murdered. We tried not to tell any of the actors, but they figured it out within, like, six hours. It was a little spooky, but they had a blast and it was great that they actually got to hang out together. It worked well for their friendship dynamics in the movie.

LA: Anything funny happen at the couples’ meet-ups?
TB: Kevin [Brennan] took Rachel [Boston] to … a rock ‘n roll show because they play rockers in the movie. I think the band was Geronimo Getty. Our friend Aaron Kyle is in the band, so Kevin planned beforehand to get up and sing a song to Rachel in the middle of the show. Little did she know.

LA: Why release the movie on Vine?
TB: [Actor-producer] Jeff [Grace] said any publicity is good publicity, so why not announce that we’re going to release the whole movie on Vine and be totally sincere about it? That’s what we did, and it worked hilariously because it’s amazing how many people didn’t get that we were kind of kidding. We didn’t expect this big of a hubbub over it, but it got everybody talking about the movie.

LA: You explore a lot of themes over the course of the film, but what are you hoping people will take away from it by the end?
TB: An actual disaster could happen at any time and in any place. You won’t necessarily be at home or at work, you might be at McDonald’s. You have to ask yourself, if a disaster were ever to strike, am I going to be a jerk and only think of myself? Or am I going to have a level head and think about other people—and maybe even have a sense of humor about it?