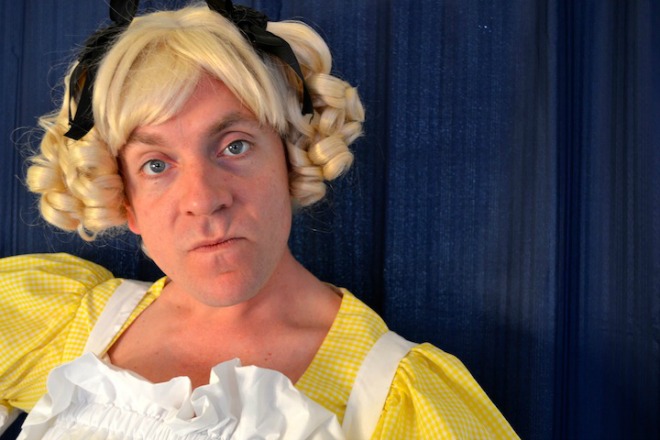 In 1975, the daughter of Judy Blume—then-reigning queen of adolescent lit and the chronicler of so-awkward-it’s-painful adolescent confessionals like Are You There God? It’s Me, Margaret—asked her mom for a favor. Please, she said. Just write a book where two kids have sex and no one dies.

That request isn’t as dated as it seems (Spring Awakening, anyone?). The result was Forever…, a calm and frank account of Katherine and Michael, two teens who meet, fall in love, and then do the deed without either of them ending up in the morgue. Then, as now, the novel stoked grown-up anxieties, enough to land the novel on the American Library Association’s most frequently banned books list throughout the 1990s.

More recently, the book has been adapted by Gerald McClanahan into a musical, Forever: An End of Innocence from Magnum Opus Players. Directed by Kiff Scholl and anchored firmly in the ’70s, the show follows Blume’s characters to their logical, absurdist ends. The show, which starts previews this weekend, plays at the Actors Circle Theater in West Hollywood through April 13th.

They’re not the only ones getting into the Judy Blume act. Last year, Are You There God? It’s Me, Karen Carpenter played to sold-out audiences at the Cavern Club Theater. Affectionately spoofing Margaret’s dread of her period and training bra (not to mention those bust-increasing exercise), the production was set to feature tracks from the Carpenters’ tragic lead singer.

Congrats, guys. We have some suggestions for YA classics that ought to be on stage. They may not have the name recognition of Freckle Juice, but they’re exquisitely ripe for satire. You’re welcome.

Julie of the Wolves by Jean Craighead George – An Inuit girl runs away from home after dodging a rape attempt by her mentally disabled child-husband and survives on the tundra by pretending to be a wolf cub and eating the food they retch up for their young directly out of their mouths. Duran Duran needs to figure in somewhere.

Island of the Blue Dolphins by Scott O’Dell – The Lone Woman of San Nicholas Island survives solo after her village is evacuated and her younger brother is torn apart by wild dogs. Karana tames the pups, sets up house in a whalebone ribcage, makes some sweet weapons and sews a cape of cormorant feathers. Maybe Tom Hanks is free to direct.

Sweet Valley High series by Francine Pascal – It’s not going to win any Newbery Medals, but this decidedly unredeeming chick lit series about the misadventures of the blond-haired, blue-eyed, size-6 Wakefield twins has so many over-the-top subplots, the parody practically writes itself. Kidnappings, werewolves, a murder involving an evil raven-haired doppelganger from the wrong side of the tracks? Yes, please.