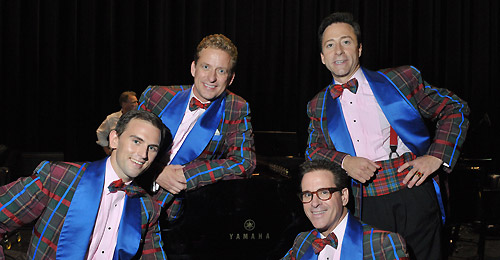 Fifty years ago the big downtown theaters were struggling against the menace of television by offering a getaway with air conditioning, plush décor and a gigantic screen. The Orpheum on Broadway installed a TV projector and showed prize fights live from the Olympic Auditorium, just a mile away.

The latest version of this phenomenon is Fathom Events, a Denver company that offers simulcasts of live entertainment ranging from opera to talk radio, projected live in movie theaters around the country. The service is hugely popular in smaller towns that these acts might pass by.

Thursday evening I attended the hybrid screening/concert Fathom offered up to mark the 20th anniversary of the off-Broadway hit Forever Plaid at the Nokia Theater. The musical, which happens to be set in the era of early TV, was a pre-recorded show introduced by Fred Willard and followed by an in-theater performance by the Plaids and special guest Carol Channing, resplendent in her velvet tuxedo and belting out “Diamonds are a Girl’s Best Friend.” Aside from a technical snafu that caused us to watch the last five recorded numbers through an orange strobe, it was thrilling to see Channing sing and the Plaids were fantastic live. All that in a glorfied shopping mall. That’s entertainment!