Home Uncategorized For the Living 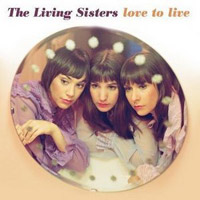 On March 13, Saturday Nights at the Getty, the museum’s series of free musical, dance, theater, and spoken word performances, featured The Living Sisters, the silken-voiced trio consisting of Los Angeles-based singer-songwriters Inara George (of the critically-acclaimed group the Bird and the Bee), Becky Stark (of Lavender Diamond) and Eleni Mandell. The band, whose debut album, Love To Live will be released next week, quietly took the stage of the intimate Harold M. Williams Auditorium for a full house. Some, already smitten with the artists, came out of devotion; others unwittingly found themselves in for a night of ethereal harmonies.

The Living Sisters formed after Stark and Mandell met in an LA bar in 2005. George joined the group the following year, and her influence has been more than musical: When the Bird and the Bee played a show at the Natural History Museum last spring, they wore matching polka-dot plastic dresses. The Living Sisters were equally coordinated on Saturday, each wearing the same dress but in a different shade and accessorized with matching rhinestone bracelets, rings, and headbands. All brunettes with chunky bangs, the band looked more like, well, sisters than a ‘90s girl group.

The band opened the set with “Ferris Wheel, ”a melancholy country ballad that had Stark on lead vocals and a very-pregnant George whistling parts of the melody. The catchy, upbeat “How Are You Doing?” followed, their mellifluous voices elevating lyrics that describe the mundane: “Something to eat, watching a show, after that I’ll sleep like a baby.” After George’s attempt to balance a guitar against her belly got chuckles, they played a sweet lullaby dedicated to mothers, fathers, sisters, and brothers called “Cradle.”

Between songs, Stark loosened up the crowd, calling the group a comedy-harmony-costume band (George cracked that she wasn’t really pregnant, just in costume). Each member also performed solo. George, left breathless from covering Bessie Smith’s “You’ve Been A Good Old Wagon,” sang a bittersweet song she wrote for her many godchildren: “Of all the ways I said your name, a hundred times but now it’s changed.” Stark performed a pared-down song she dedicated to the world: “Oh, my beautiful world, all my boys and my girls, I love you.” And Mandell reminisced about growing up in the Valley: “Dad in his red Pendleton shirt, shag carpet room, the summer always hot.” After taking the audience on an audio journey that spanned country, soul, gospel, and doo-wop, they finished the night with a funky George Clinton cover and then headed back off the stage—still dancing.