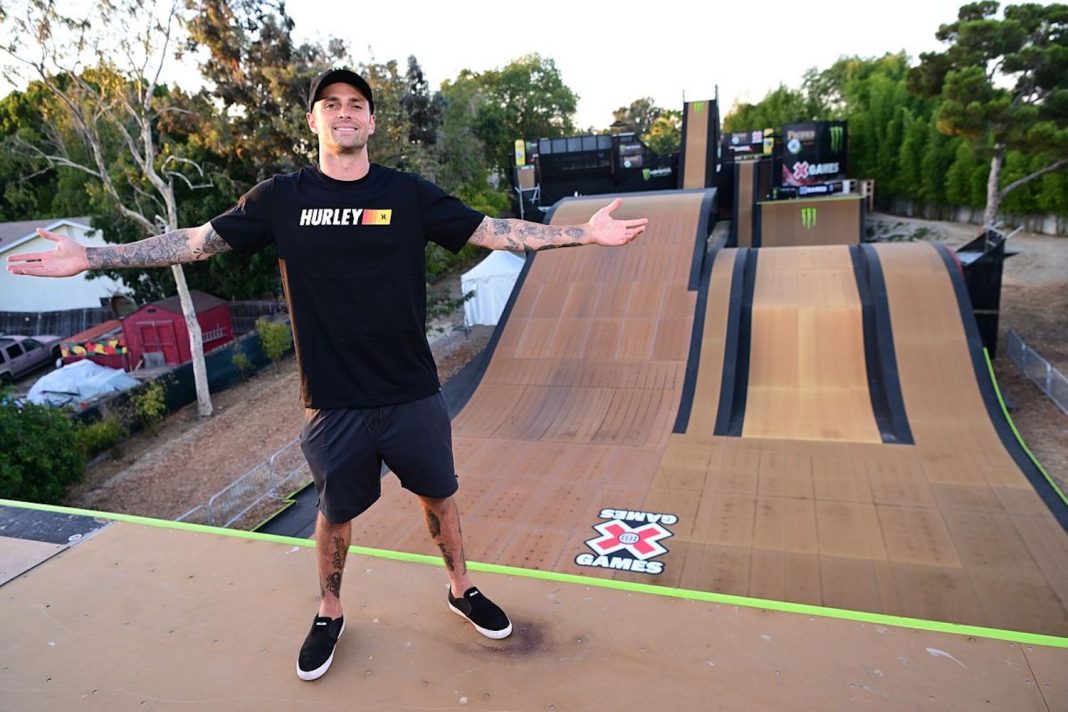 Like any self-respecting party host, Elliot Sloan is excited but nervous. Looking around his backyard, he admitted to LaMag that his upcoming party “is probably going to be the most people” he’s ever hosted.

This Wednesday, the five-time X Games Gold medalist is set to host the Vert, Vert Best Trick, and MegaPark competitions of X Games 22 in the SloanYard, his backyard skatepark in Vista, California.

Vert and Mega are built around skating near-vertical ramps. In the Vert and Vert Best Trick categories, skaters will traverse Sloan’s custom halfpipe, and on the mini-Mega ramp, skaters will descend a long ramp, jump over open air, do a trick on a quarterpipe, then return to a second quarterpipe and perform the third trick. Videos on Sloan’s YouTube channel show him discussing the angles he needed to build his ramps to make them both safe and functional.

And SloanYard is certainly the backyard of any skater’s dreams.

Name a fantasy backyard amenity, and Sloan has got it. Classic pinball? Pool table? Music studio? Check out his garage. Behind the garage, the classics. A pool and hot tub is complemented with a freshly redone deck and seating area and, as of this month, a sauna, for good measure.

Any friend group would want to chill in this yard, but for Sloan’s skateboarding peers, the real reason to hang at the SloanYard is the custom skatepark. Beyond the pool is a 15-foot half pipe and a mini-Mega ramp that’s 27 feet tall and a landing ramp that dips 13 feet into the earth.

If you’re wondering how it’s possible to build all this in a residential area, you’re not alone. Before buying the property in 2012, Sloan reached out to the city of Vista to confirm that it would be legal to build a personal skatepark. The city told him that as long as whatever he was to build was not attached to the house, he wouldn’t need a permit. The exact words were if “it’s under 30 feet, it’s considered playground equipment.”

So with this confirmation, Sloan purchased the property with fellow Mega skater Pierre-Luc Gagnon, and since then, Sloan has been slowly building out the complex. This culminated in early 2020 with the completion of his mini-Mega ramp, which finally led ESPN to bring the world’s biggest skating competition to the SloanYard.

“Ever since Elliot began developing the MegaPark, we’ve been interested in bringing the discipline to X Games,” says Tim Reed, ESPN’s vice president of programming & acquisitions. “Between the MegaPark and 100-foot Vert ramp, the SloanYard offers the perfect venue to encourage progression in skateboarding. We’re stoked to be able to showcase Elliot’s innovative courses and disciplines.”

SloanPark’s key innovation came at the back end of a traditional Mega run for the pro skateboarder. In the past, a mega ramp measured 70 feet long, led into a jump over open air, then ended with the competitors performing a single big trick off of a quarter pipe. Skaters would land their one trick at high speed, and simply stop, throwing away precious kinetic energy. At the SloanYard, there’s a return and second quarter pipe parallel to the mini-Mega, allowing skaters a second and third opportunity at tricks.

Videos on Sloan’s YouTube channel from private runs at the SloanYard show skateboarders who had previously felt disillusioned by the megaramp light up –—they finally felt challenged by the added elements of the MegaPark. In recent years, says Sloan, the Mega category “was kind of starting to get a little stagnant.” That the X Games have entrusted Sloan with the category suggests that they believe in the momentum he has created around the MegaPark and his vision for the future of the category.

Despite Sloan’s hospitality, he does plan to keep one part of the house to himself.

“I’m definitely trying to close off my bathroom,” he says, “because dudes have blown it up before and it’s like, ‘great!’ and I gotta call a plumber out.” There will be port-a-potties for staff and VIP restrooms for competitors, but Sloan anticipates he will use the house bathroom as his sanctuary.

“Well, it’s funny. [In] our bathroom upstairs there’s a window. So you’ll be sitting on the toilet and you can just see everything. I might go out there, you know, drop a deuce and check everything out,” he revealed.

Turns out even an X Games champ—and a too much information sharer, like Sloan—has some limits.

Sloan competes in three disciplines on July 20, with all streaming live on ESPN+. Fans can go to XGames.com for the full telecast schedule, and all X Games 2022 competitions will be available live on ESPN+.

My LA to Z: Nyjah Huston