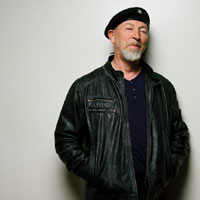 The first time I heard about British guitar player Richard Thompson was more than 20 years ago from a British friend of mine. He said, “You know how someone painted ‘Clapton is God’ on a wall somewhere in England in the ‘60’s? And how Americans still really feel that Clapton is God? Well, in England, Richard Thompson is God.” A better guitar player than Clapton? Could that be?

Yes, it could, although Thompson comes from a different tradition: folk rather than blues. He is known for his unusual “pick and fingers” technique; he plays bass notes and rhythm with a pick, but adds melody by plucking with his fingers. In 1967, at the age of 18, he was performing with the newly formed Fairport Convention, which had started out as a cover band. He started writing songs and lit out on his own where he met and married Linda Peters, sparking the next phase of his career. Over nine years, Richard and Linda Thompson put out six albums together; the last, Shoot Out the Lights, is generally cited as their greatest work.

Since then he has continually released albums (like 1991’s outstanding Rumor and Sigh) that have been lavished with praise by critics and peers. Thompson is a one-of-a-kind songwriter, known for his dark, funny lyrics. He has won countless musical awards, was appointed Officer of the Order of the British Empire, and had his songs covered by everyone from Robert Plant, Elvis Costello, and REM to Los Lobos, David Byrne, and Bonnie Raitt.

His latest release, Electric, produced by Buddy Miller, has been met with critical raves and is being described as his strongest collection of songs in years. Thompson, who has lived in Los Angeles for about 25 years, often performs solo acoustic, but for this tour he’s playing a hometown show on Friday night at the Ford Amphitheatre as part of a trio with bass and drums. Befitting the album’s title, it will all be electric, and audiences can decide who really is God.