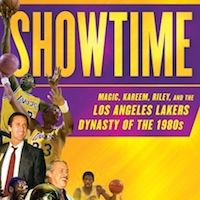 Under the tutelage of coaches Jack McKinney, Paul Westhead, and Pat Riley, the so-called Showtime Lakers built a brand of basketball that was as successful as it was flashy. The ’80s-era team played at a pace rarely seen before, and in doing so revived their image and the game.

The legacy begins with young point guard Magic Johnson, who was miraculously drafted by Lakers owner Jerry Buss to help lead the team’s offense in 1979. Then came others: Kareem, Wilkes, Worthy—these names call to mind a singular moment in basketball that might never be repeated. Sure, Kobe and Shaq lorded over a mini-dynasty, with three straight titles at the start of the millennium, and Pau Gasol brought two more. But one could argue that the Lakers and their Showtime style remain the model of NBA excellence.

In his recent book Showtime: Magic, Kareem, Riley, and the Los Angeles Lakers Dynasty of the 1980s (Penguin), author Jeff Pearlman dives deep into what made this Lakers squad a five-time title winner in the 80s and forever part of history. We caught up with Pearlman to ask about his book and the game-changing climate of the era.

When did you come up with the idea for Showtime and how long did it take to report?

I came up with the idea right after my last book [the best-selling Sweetness: The Enigmatic Life of Walter Payton]. So maybe three years ago. I usually give myself a year-and-a-half of nonstop reporting and half a year to write the thing. I do all the reporting and digging first, and one day I just decide, “OK,” and drag all my notes to the nearest Starbucks coffee shop, sit down, and write.

What made the 1980s Lakers so compelling?

That’s my boyhood. I’m 41, so for me, the ’80s is prime real estate. I grew up in New York and was part of a family of pretty big New Jersey Nets fans, and they were terrible, so Lakers-Celtics was sort of a thing. And I grew up in a very small town and a very conservative, white town. All the kids, all the people around me—it sounds weird, especially in 2014—but everyone rooted for white athletes. If you lived in my town, your favorite baseball player was supposed to be Don Mattingly, you rooted for St. John’s basketball, and since Larry Bird played for the Celtics, you rooted for the Celtics. I instinctively went against that. So for me, it was the Lakers. It was Magic and Kareem—they had that pizzazz, and they were fast, and they were cool, and the West Coast seemed like this dream world that I never experienced.

You mentioned early on in the book that 999 out of 1000 basketball fans have never heard of Jack McKinney, who had a bicycle accident just 14 games into his tenure that left him unable to coach. What did he mean to the Showtime Lakers, and why is it that so many people don’t remember him?

Well, he was the Godfather in my mind. He started the Showtime offense. They have this rookie point guard, Magic, and they have Norm Nixon and Jamaal Wilkes—so they have these players who can run-and-gun up the court, and he was the one who decided to do it. It all stems from him. I honestly think they would have been as successful in the next decade had they stayed with Jack McKinney as they were with Pat Riley. Great coach. And McKinney was maybe tactically a little better. And no one heard of him because it was a different time in the NBA. It was almost the Dark Ages when this happened. He was a John Doe in the hospital for a few hours. Can you imagine any city now where the head coach of an NBA team is a John Doe? It’s ridiculous. But it was just a different time. People forget very easily, and that’s kinda sad.

How did McKinney deal with Kareem Abdul Jabbar differently than Jerry West did?

He was direct with him. Kareem was aloof and could be difficult and kind of ornery, and McKinney just spoke his language. He had been a coach for a long time. He wasn’t a mean guy, but he was a take-no-shit, East Coast kind of guy. And Kareem was an East Coast guy. I think there was a common language there that Kareem wasn’t intimidated by and he responded pretty well.

There’s a quote early on from Laker-turned-broadcaster Rod Hundley: “[Former Lakers owner] Jack Kent Cooke was the No. 1 asshole who ever lived.” Can you talk about that dichotomy between his business sense in the ’60s and ’70s and who he was as a person?

He was not liked. One of the first people I interviewed was this woman Claire Rothman, who sort of opened the book on page three and said, “Jack Kent Cooke was a sicko.” And he was. In 2014, you couldn’t get away with what he did. He would have women come into his office and he would have them twirl. He treated them as the typical sexist, Mad Men businessman would. He was very smart, he was a very good owner. He was great with the Redskins. He hired good people. But most people thought of him as a pretty big dick.

As you note, the entire state of the franchise rested with a coin flip with the Chicago Bulls in 1979 for the first pick of the draft that year. How did drafting Magic Johnson change the landscape of the Lakers, and the NBA?

First of all, if the Chicago Bulls win that coin toss, Magic Johnson goes back to Michigan State. And the Lakers take Sidney Moncrief. Everything changes completely. It was like taking this neon, megawatt sign and putting it on the front door of one of the marquee franchises of the NBA, and simultaneously taking his archrival, whom he had just played against in the championship game, and putting him in the polar opposite franchise. I actually think Magic was more important than [Larry] Bird because at the time there were a lot of people who considered the NBA to be “too black.” And here comes this guy Magic Johnson, and everybody wants to be his buddy. He’s smart, happy-go-lucky, he has a beautiful smile, he’s gregarious. He broke down barriers.

Paul Westhead filled in for McKinney and won the title in ’79-’80, but was fired less than two years after that. What was the biggest reason for his downfall?

Sort of what happened to Riley and what happens to a lot of coaches. I think he fell in love with the clips. He started believing that he was this genius, and he really ran Jack McKinney’s office in that first year, and then he decided he needed to change things up. I interviewed him, and he’s a great guy, but I think he’s a little in denial on this one. He’d start having guys run to spots on the court and it became really predictable and players hated it and they complained. All of those guys except for Kareem hated the new system.

How was Pat Riley’s philosophy different, and how was he able to handle Magic Johnson more favorably once he took over?

He went back to the McKinney offense, run-and-gun. Riley was smart, early on, to let Magic do his thing. He wasn’t heavy-handed. He knew Magic was really good at looking over defenses, he knew he was really good at passing, at leading on the court. So he just let him do it, but I think he really built his offense around Magic. I think Riley was smart enough to realize that everything flowed through him.

One of the more widely publicized aspects of this book is the promiscuity of the Lakers. Was this unusual for athletes at the time?

I don’t think Cleveland and Milwaukee had the same number of groupies as the Lakers, but I do think in the pre-HIV era, people were having tons of sex. There were tons of groupies, and it was a part of the show and the Lakers were just—it’s not like anything was really wrong with it. They were 25-year-old guys, most of them single, going out and having lots of sex. If you see Magic Johnson with a pretty woman or Norm Nixon with a pretty woman, what is there to really expect? Nowadays we live in an age of gotcha celebrity journalism. If you catch a celebrity doing anything, you pull out your phone and put it on Twitter, or TMZ is already there. I don’t think it was that big of a deal back then.

Obviously this Lakers began to fade in the late ’80s with a loss in the Western Conference Semis in 1989 and the resignation of Riley, but if you were to boil it down, what does this Lakers dynasty mean to the game and where does it fit in basketball history?

I think it’s the best. I think it speaks to the power of having a star who doesn’t care whether he scores 30 points or two points as long as the team wins. I think that’s so rare. Living in New York right now and watching Carmelo Anthony and the awful, selfish Knicks, and having just written this book, makes you appreciate a superstar who only wants to win and is all about winning.