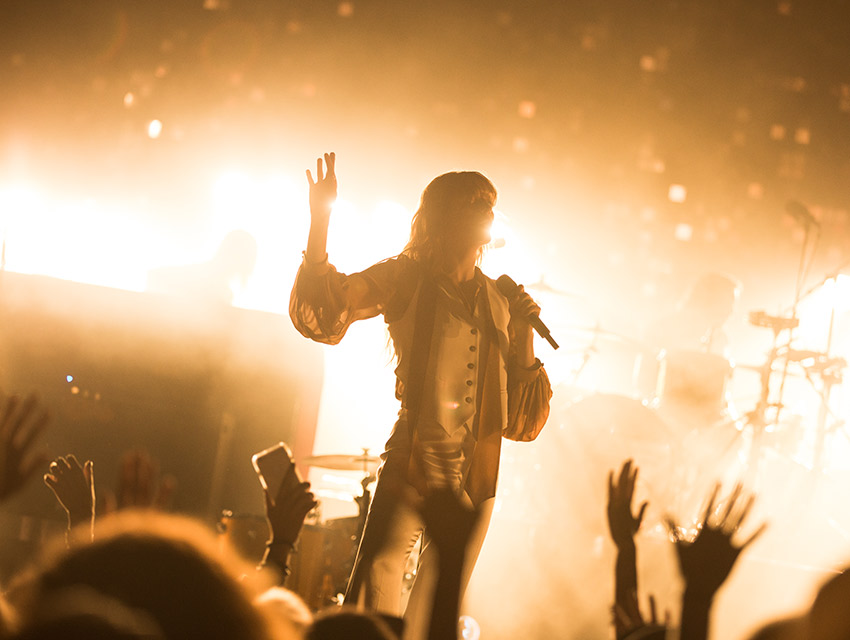 Los Angeles has long been a special place for Florence Welch. So much so that when she titled her latest album, How Big, How Blue, How Beautiful, she named it for the L.A. sky. This weekend, she returned the love with two triumphant shows at the Hollywood Bowl. “This gig is like stepping on hallowed ground for me,” Welch said from stage. “The last time I was here, something happened to me that sparked a song. It’s like a homecoming.”

As an album, Beautiful is actually a less wild, ethereal offering than Welch’s previous offerings, with fewer harps and tribal drums. Instead, it’s a more personal and direct with some breathing room that allows those distinctively Florence moments of unrestrained lungpower to shine.

At 29 years old, Welch has already matured greatly as a vocalist, performer, and songwriter, still passionate and mesmerizing as ever but exhibiting more sanguine strength than ever before. She owes some of that growth, she said, to what she has experienced in Los Angeles. Here are three more things we learned at the first of Florence + The Machine’s two magnificent “homecoming” shows.

The title track “How Big, How Blue, How Beautiful” is inspired by a previous show at the Hollywood Bowl.
The song opens with the line, “Between a crucifix and the Hollywood sign, we decided to get hurt,” a direct reference to the Bowl and a previous show she played there. She said she saw the crucifix and the sign as she ran up into the crowd that night, up to the farthest seats, and she was “falling in love with everyone she met.”

“I’ve carried this song with me around the world,” Welch said before performing it. “Now I’ve brought it back to you. It’s yours.”

Her early hit “Cosmic Love” was written during a terrible hangover in Crystal Palace, London.
“This song was written in a place not known for blue skies, called Crystal Palace. It was one of the first songs I ever wrote, and I was so hungover, the most hungover a person has ever been,” Welch said, glancing at the magnificent stage behind her—a giant shimmering tile mosaic hanging behind her 11-piece band—and joking that the crowd can see she isn’t a person who does anything halfway.

Bandmate and songwriting partner Isabella Summers told her she wasn’t allowed to lie down. She had to write a song.

“So, the two triumphs of that day are that I did not get sick and we wrote this song,” Welch said. “From the pit of Crystal Palace to the beautiful Bowl.”

You shouldn’t attend a Florence + The Machine show unless you’re willing to ditch an article of clothing and (potentially) kiss a stranger.
During crowd-favorite and main set closer “Dog Days Are Over,” Welch asked the crowd to embrace and kiss one another, touch one another’s faces, and remove a piece of clothing. “Take something off and wave it above your head,” she said, leading the charge by taking off her shirt and darting across the catwalk in her bra. “Think about something you don’t need because, Los Angeles, tonight you’ve been released!”