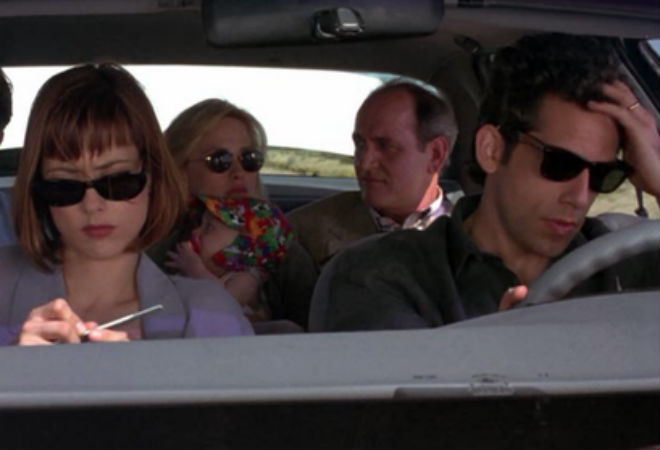 We love road trips. Not just taking them—which we do in our March issue with ten custom-built routes from the California coast and Baja wine country to Zion National Park and the Desert Hills Premium Outlets—but also watching them on-screen.

If you don’t have time for a romp around the Golden State, live vicariously through one of the road trip movies we’re presenting this month with ArcLight Cinemas in Hollywood. The mini-film festival opens on March 4 with Flirting With Disaster, the 1996 Ben Stiller comedy about an average guy who sets out to find his biological parents before his own child is born.

“I dropped a lotta baby batter in my day. This is the first son I ever met,” says crude, racist Fritz Boudreau to his newly arrived son, Mel Coplin (Stiller). The two men couldn’t be further apart, but Coplin so desperately wants to believe that Boudreau is his biological father that he willingly ignores his insults, threats, and the fact that they look nothing alike. It’s a pattern that’s repeated over and over again by Coplin, who yearns to discover his origins, a task that ultimately proves impossible. A comedy of errors orbiting around a much darker truth, Flirting With Disaster chronicles a search for identity while suggesting that it doesn’t actually exist.

Had writer and director David O. Russell cast anyone other than Stiller—whose trademark nice-guys-finish-last persona is in fine form here—the character’s desperation might have been unbearable instead of hilarious. As Coplin, Stiller’s strength is his idiotic resilience and persistence. He refuses to accept that a blonde woman of Swedish descent isn’t his mother even after he’s been informed that the adoption agency made a mistake; the same is true of his encounter with Boudreau. Luckily, Stiller (who plays opposite the stellar lineup that includes Patricia Arquette, Mary Tyler Moore, Téa Leoni, Alan Alda, Lily Tomlin, and Josh Brolin) escapes a tragic fate, but we won’t spoil the ending. Instead, here are five of Ben Stiller’s funniest moments to get you ready for Flirting With Disaster.

Meet the Parents
The hugely successful comedy that spawned two sequels featured Robert De Niro as Stiller’s semi-psychotic father-in-law, a former secret agent who goes out of his way to torment his new son-in-law. The “plane bomb”-scene is every air traveler’s worst nightmare—and their secret fantasy.

Zoolander Ben Stiller’s airhead male model, inventor of the look known as Blue Steel, doesn’t realize that he’s walking up the podium to receive an award that has been bestowed on his nemesis (Owen Wilson). Stiller is the master of stubborn delusion, making the audience’s toes curl with sympathetic shame as he struts across the stage.

Tropic Thunder
Tropic Thunder (which, like Zoolander, Stiller also directed) offers this little gem of a scene featuring Matthew McConaughey (a far cry from his recent roles in Dallas Buyers Club and True Detective) as the talent agent with a solution for any problem.

Dodgeball
In this treasure from 2004, Stiller steals the limelight from Vince Vaughn with his performance as White Goodmen, a psychotic fitness guru with a penchant for elaborate malapropisms and an inflatable crotch.

There’s Something About Mary In the 1998 movie that put the Farrelly Brothers on the map, Stiller stars opposite Cameron Diaz as the eponymous Mary and Matt Dillon as a seedy detective hired to track her down. Sixteen years after the film’s release, the infamous zipper scene is still excruciating to watch and remains a benchmark in the history of cinematic humiliation.