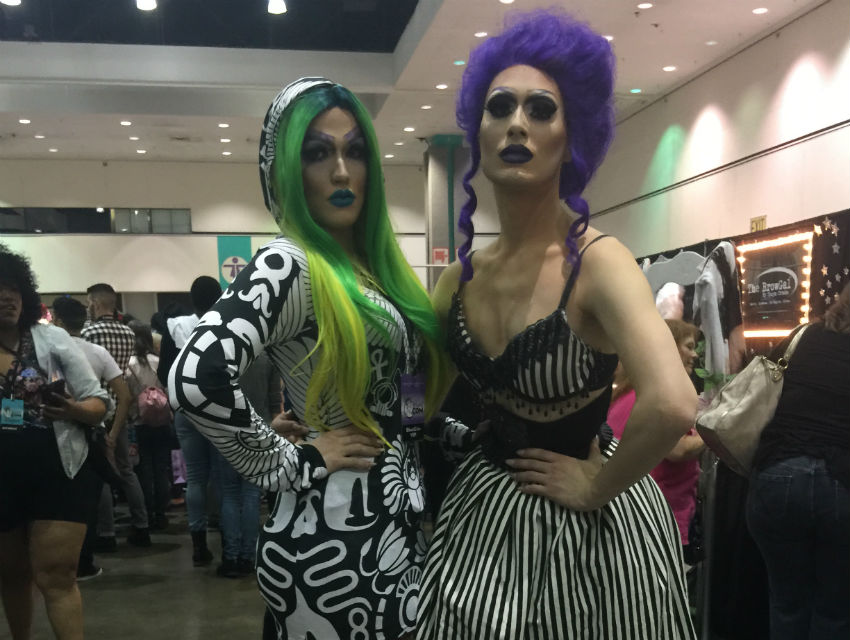 On May 16-17, close to 14,000 people descended on the Los Angeles Convention Center for the world’s first ever large scale Drag Convention. Ru Paul, host of Logo TV’s most watched show Drag Race, organized the event in order to honor the “the art of drag, queer culture and self-expression for all.”

The convention is imagined as a mash up of Comic-Con, BeautyCon, and Hello Kitty Con, and it delivered just that. Attendees dressed in their most glamorous getups (see the gallery below), which seemed appropriate when in the presence of some of the fiercest queens in the country. Beauty companies (like Anastasia and NYX Cosmetics) and fashion lines (such as Pin Up Girl Clothing and Blacklickorish Latex), adored especially by those in the drag community were among the dozens of vendors showcasing their products.

But the real celebrities of the event were the former Drag Race contenders like Raja, Katya, and Alyssa Edwards. Fans patiently waited in a line for a brief meet-and-greet and a snapshot with the reality stars. For those who couldn’t endure the long waits to meet their favorite queens, there was no shortage of entertainment. Some drag starlets hosted their own workshops for devotees to get insight on their best kept secrets, ranging from “How To Be a YouTube Star”, “Unbelievable Wigs: Hair Raising Tutorial”, and “So You Think You Can Vogue.” In addition, there were multiple screenings of drag cult classics like “Rocky Horror Picture Show,” “I am Divine,” and “Paris is Burning.”

On Sunday, attendees were lucky to catch the self-appointed “Supermodel of the World,” a.k.a. Ru Paul, give the keynote address on the importance of a supportive drag community, which was the ultimate highlight of the event. If you missed out on this year’s DragCon, don’t sweat it. The convention will return to L.A. next year.

The Queens of Bushwig Want L.A. to Rethink the Nature of Drag

Instagram Changed Its Logo and Everything Is Going to Be OK