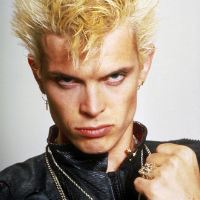 Like everything else from the 1980s—high-waisted jeans, overalls, shoulder pads—Billy Idol is back.

Yes, that Billy Idol. The sneering, spiky haired, pop-punk singer was among the most successful peddlers of commercially compliant sonic rebellion; it was dangerous enough for the suburbs but sufficiently anodyne for mainstream radio. Think of him as a walking Hot Topic store.

During the ’80s, Idol made a name for himself with hits like “Rebel Yell,” “Mony Mony,” and “Eyes Without A Face.” But the pinnacle of his lyrical and aesthetic creativity was “White Wedding.” Contrary to popular belief (and the repeated “Hey, little sister” lyric), the song is about his rock of love marrying someone else. Though the beat is beyond catchy and the lyrics are, easy to remember, the video is even better. From Idol’s red leather getup to the big-haired women gyrating in cat suits, the video epitomizes the flash, fun, and all-around wackiness of the ’80s.

It’s been nearly a decade since Idol released new music, 2005’s critical winner Devil’s Playground. What has he been doing since then? Attempting to make a comeback.

This October, Idol will release his autobiography titled (what else?) Dancing with Myself. He’s also got a new album, Kings & Queens of the Underground, which comes out the same month.

As comebacks go, he’s not doing so bad. Idol is currently on the European leg of his world tour. Consider for a moment that in 2014, he has enough fans (or hubris) to fill thousands of seats around the world. And he’s expected to cross the pond sometime next year. Until then, we’ll always have the memories. And visions of Idol singing shirtless in church.

RELATED: Read more about L.A. during the ’80s in our special issue on newsstands now.