Home Uncategorized Five Shows to Watch After You Binge on Season Two of “Orange... 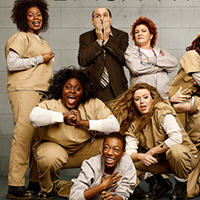 There’s a downside to binge-watching: the come-down. What’s left after a weekend-long marathon of your newest addiction? What do you do?

We’re already planning for the aftermath of Orange is the New Black season two, which drops on Friday (June 6). Based on the memoir of Piper Kerman, a self-described WASP who landed in prison after laundering money for her then-girlfriend, the show stars Taylor Schilling as Piper Chapman who’s trying to maintain her marriage on the outside while avoiding trouble on the inside during her stint in jail.

Once you’re done with OITNB, here are five other prison shows to bunk with.

5. Prison Break
The central premise of Prison Break, which ended in 2009 after four seasons, involves a successful architect quitting his job, tattooing an elaborate map of the prison his brother is incarcerated in on his body, and committing a felony that lands him in the same cell block. If that synopsis doesn’t sell you on it, we don’t know what will.

4. Prisoners’ Wives
Prisoners’ Wives is at times gut wrenching, but it’s performed in that uniquely British tone that suggests most problems should be met with a stiff upper lip and a hot cup of tea. The show follows the travails of four women from different social backgrounds who all have husbands in jail. You may recognize tough guy gangster Paul Miller, who’s played by Iain Glen (Jorah mormont) from Game of Thrones. Prisoners’ Wives is a BBC 1 production, but there are rumors of an American adaptation in the works.

3. The Prisoner
The Prisoner is one of the most humorous and intellectually curious portraits of incarceration in TV history. The iconic show, which ran from ’67 to ‘68, stars Patrick McGoohan, who also wrote and directed several episodes, as a secret agent abducted to a remote seaside village and left to solve the mystery of his own disappearance. The show’s postmodern bona fides abound, from the fact that McGoohan’s previous starring role was as the titular Danger Man on the early ‘60s Scottish secret agent drama to its sharp commentary on the events of the day and trippy visual style.

2. Oz
Like its fictional namesake, Oz is a surreal and at times terrifying world (but with fewer songs, demon monkeys or friendly anthropomorphized creatures). HBO’s drama, which ran for six seasons in the late ‘90s/early aughts, follows the life and times of an ensemble cast behind bars in a maximum security prison in New York. It can be incredibly brutal, and if you’ve ever wanted to see what Christopher Meloni of Law & Order: SVU looks like on the other side of the justice system, here’s your chance.

1. Rectify
Set in a small town in Georgia, Rectify follows Daniel (Aden Young), a thirty-something man who was falsely convicted of murder at age 18 and has spent all of his adult life on death row—until his release in the first episode. Rectify is affecting, beautifully acted, and encourages viewers to question the death penalty and our system of incarceration. The show’s first season aired on SundanceTV last year. The second season premieres later this summer.