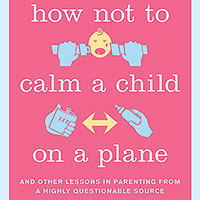 Last month, the actress, comedian, and writer released a new collection of essays, How Not to Calm a Child on a Plane (Da Capo, $20). Here she talks to us about growing up with a set of “tie-dye-wearing, dope-smoking, anti-establishment hippies,” how parenting has affected her comedy, and an overall lack of shame. PLUS: Enter here to win a free copy of her book!

Surely everyone has wacky parenting stories. Was there a moment when you thought, “My life is weirder than everyone else’s, and this should be a book”? Or had you planned to pen this pseudo-memoir while you were still pregnant?
I don’t know that my parenting life is that much weirder than anyone else’s. I just happen to be blessed with a complete lack of shame, so I don’t mind writing about things that most people wouldn’t dream of revealing.

I will say this: my childhood was a lot weirder than everyone else’s (I was raised on the Canadian prairies by tie-dye-wearing, dope-smoking, anti-establishment hippies), and while writing the book I found myself looking back on the details of my childhood, not just as funny anecdotal stories, but as a comparison to the way my husband and I are raising our daughter. And the upshot is that even though my parents were pretty untraditional in their methods—and stoned a good deal of the time—they actually managed to raise a pretty intelligent, happy and productive brood.

How do you think your daughter will react to the book when she gets older?
I was very conscious to not write anything about my daughter that would come back to haunt her when she’s thirteen. On the other hand, the things I write about myself—I can’t guarantee that she won’t be horrified and want to pluck her eyes out of her head when she reads that stuff.

I run every story past my husband because (A) he’s smart and funny, and I trust his feedback; and (B) to ensure that I won’t suddenly get served with divorce papers. He does have full veto-power, but he rarely uses it, and even when he does he will sometimes change his mind. (Case in point: he gave me permission to write about the hilarity that ensued when he mistook a piece of dental floss floating in the toilet for an intestinal worm…God bless that man.)

I gave my parents veto power too, since they appear frequently in the stories. They didn’t object to any of it, even when I talk about how I was traumatized as a teenager by overhearing them having sex. My parents are also incredibly smart and funny—I sent the book to them before turning it in to the publisher, and both gave me terrific feedback and ideas for jokes. My mother had one note in particular; it had to do with a story about my breastfeeding problems. In the piece I talk about how my daughter preferred the bottle over breastfeeding, and that I was “cock-blocked” by a binky. My mom’s note was, “since you’re talking about something that’s made of silicone, maybe there’s a dildo joke in there somewhere?” (Did I mention that she’s a 75-year-old grandmother?)

How has being a parent shaped your writing style? Your comedy?
It’s definitely changed my habits—I am much more focused now, because I have to be. Whereas before I had a pretty well-developed set of procrastination techniques (Clean the house! Play the guitar! Learn to re-plumb a sink!), now the moment the kid is out the door I have to hit the ground running. Interestingly, although I have less time to write, I’m a lot more productive. And my house is a lot messier.

Style-wise, it’s also made a difference—I come from a background in sketch comedy, and I’ve always had really absurd, silly tastes. I grew up loving Monty Python, SCTV, and Carol Burnett, and I rarely wrote from a personal place. But then I had a kid. That—combined with the fact that when she was a baby we moved to a new city (Chicago) where we didn’t know many other parents—inspired me to start writing about more personal, relatable things, like, “What the f–? Am I the only one who looks at the soft spot on my baby’s head and secretly wants to push on it really hard?” So yes, I’m probably more honest and reality-based in my writing now. But I still love the absurd stuff—a couple of years ago we moved back to L.A. and I got a job writing on an animated Disney show, Wander Over Yonder—which is about as absurdly funny as it gets.

The ultimate Sophie’s Choice: which essay is your favorite, and why?
I don’t have a favorite story—they’re all my imperfect little babies that I love and cherish and that, if I look at them long enough, I want to tear apart limb from wordy limb.

I do have a favorite for how easy it was to write: the title story, the one about the disgusting (and mathematically improbable) thing that happened to me when I tried to calm my crying baby on a plane. That story flew out of me in an afternoon. I wrote it just like it happened—I barfed it out. Of my fingers.

What are you hoping readers will glean from your experiences? Something more than a laugh?
I honestly do believe that laughter is the best medicine—at least in the absence of powerful pharmaceuticals—so yes, my number one goal is that people have a good time when they read this book. I hope they laugh ‘til they puke. Though if they do, obviously I hope they dispose of it in a responsible manner.

But aside from that, it would be great if this book can give some mom or dad a little bit of comfort. Becoming a parent is a shocking experience, and no matter how much you love your child, it can be tedious, isolating and really hard. So if I can help provide a little relief by giving people a reminder that they’re not alone in this, that would be great.

I also hope that people come over to the dark side with me, and accept the idea that there is no one right way to raise your kid. We have become so precious about parenting, and every decision has become infused with unbearable weight: Breastfeeding or Formula?! Disposable or cloth?! Private school or public?! The bottom line is that no single decision is going to ruin a kid’s life, so come on – let’s all just lighten up on the pressure, can we? Cuz like I said, my parents did it all half-baked, and look at me—I turned out fine. (Mostly, anyway.)

Stein will be hosting a Q&A and a book signing tonight at Book Soup.

Enter here to win a free copy of How Not to Calm a Child on a Plane!