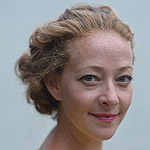 Her much-lauded debut novel, No One Is Here Except All of Us, put Ramona Ausubel on the literary map. Her second book, A Guide to Being Born (which came out May 2) explores the world in the same fantastical way. The book is a collection of 11 short stories about life and love from conception and gestation all the way through to birth. Ausubel talks to us about the book’s concept, her writing process, and grandmothers at sea.

How did your second book evolve?
I was in my 20s and motherhood was a looming concept. The whole parenthood thing seemed strange. I thought am I ready for that? Is anyone ready for that? The first story in the book is about that. I just started writing stories. I had, after a couple of years, a stack. I was very interested in stories where the themes were love, birth, being in a relationship. I wrote in the same year, two stories about pregnancy: “Atria,” where a pregnant teenager thinks she will give birth to any number of animals, and “Chest of Drawers,” where a soon-to-be father grows a chest of drawers when his wife is pregnant. I thought I can’t write stories all about this.

Why did you decide to organize the book into four life stages?
The order of the book happened later. The idea came from a reader. She told me, ‘I want you to look at this and see how these go together.’ You can really get lost in your brain so a fresh set of eyes was what the book needed. She pointed out something that seemed obvious but not to me as I was writing.

In Safe Passage, which is the first story in the collection, you open with the line, “The grandmothers—dozens of them—find themselves at sea.” What an interesting image. Why did you decide to begin your book this way?
That story comes from when my grandma was in the hospital and I visited her and there were all these old people in this hospital. When people get older, we put all these people in homes, isolated, like they are floating at sea. They just sort of get put on these ships. This line popped into my head and I wanted to push this idea further. I am always trying to write about what’s real in the world, even though it’s in a fantastical way.

How is writing short stories different than writing a novel?
Though I end up working on stories and novels the same amount, there are clear differences. I’m not a planner. The pleasure to pain ration is more in my favor for short stories. I get this glimmer of an idea and I have to write the first draft in one go to see if it lives. I can do that draft in two days since it’s a few pages. I love short stories. For writing a novel, you get to keep living in this world you create and with these characters, all the time for many months. It’s as much a part of your world as anything else by that time.

What is your writing process like?
My writing process is ‘trust the disaster.’ Go big at the beginning and do anything to get to the end. If that means getting rid of a character that has gotten boring in the middle of the story or introducing a new character in the middle, then I do it to keep my mind excited. I keep infusing it with as much life as possible. The minimum number of drafts for the stories in this book was 10 to 15 edits, with some as many as 25 to 30. The beginning part is where all my anxiety is. It’s about making a mess and having faith in it.