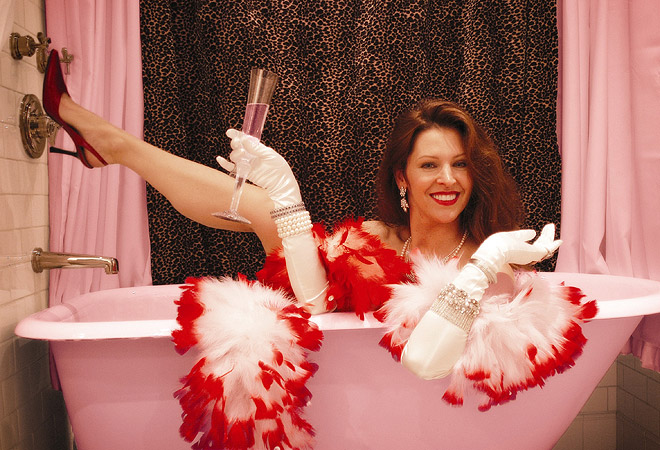 Burlesque hasn’t been a mainstream form of entertainment since the 1940s, but it has experienced something of a modern revival in recent years: between Liz Goldwyn’s 2006 book, Pretty Things: The Last Generation Of American Burlesque Queens and support from celebrities like Dita Von Teese, the spirit of the performances is making a comeback.

Inspired by Staar, her lingerie-wearing cabaret alter ego, Leslie Zemeckis dove boa-first into the world of burlesque and sashayed out with her own critically acclaimed documentary. Tomorrow, Behind The Burly Q—Zemeckis’ first book and the companion piece to her film of the same name—will be released. She talks to us about the history of burlesque, America’s contribution to striptease, and what she hopes to achieve by lifting the silk veil on this oft-overlooked art form.

How did you become fascinated by the world of burlesque? Have you been interested in it since childhood?
No, not at all. I knew nothing about it. I was doing a burlesque-inspired show, and the more research I did, the more I realized that nobody has ever bothered to talk to the performers. There were thousands and thousands of people in the burlesque scene, so I just said [to husband Robert Zemeckis], “Honey, I’m going to do a documentary.” And it grew into this thing. We spent two years interviewing everybody who was still alive and had been an original burlesque—’20s, ’30s, ’40s, ’50s—all across the country. I had over 100 hours of interviews and you can’t get them all in the film, so I decided to write a book with the stories of people who are long dead with nobody to talk about them. I fell in love with these people and had a great empathy for the fact that they were considered—at the time and still today—second-class. They weren’t considered a talent whatsoever; burlesque is generally equated with pornography, but I found these people to be artists who had a craft and cared deeply about what they did. That became my mission: to have their voice heard and change the stigma that they lived through.

Who were some of the more interesting performers that you interviewed?
The oldest person I interviewed was 97, and sharp as a tack. Mimi Reed. She was a specialty dancer, which means she wasn’t a stripper, although she said she should’ve been because she would’ve made a lot more money! She was absolutely, stunningly gorgeous in the ‘40s. Red hair, big lips, big eyes, beautiful figure. She would do comedic dances and then she would dance with a big rubber ball. It took me six months to get her to agree to an interview, but she was incredible. Then there was one woman who was in her 70s who told her 48-year-old and 50-year-old sons that she had done burlesque just a year before our interview. She said that she’d felt ashamed that she had done it. But then she came to the realization by the end of the interview that it was one a hell of a life.

Tell me a bit about burlesque’s history.
A burlesque show is a variety show. Original burlesque would take the popular movie of the day and then they would do a “burlesque” on it, like Carol Burnett does in her Gone with the Wind skit. Then it would get a little wink, and a little blue, and a little naughty, and that was because of the stripping. The stripping was an add-on, it wasn’t the main attraction, but obviously the audience loved that, so that aspect took over. Then came Playboy magazine, and the bikini came along in 1946, so you were beginning to see women without their clothes. But this comedy was really honored. Burlesque performers entertained so many people in America for so long, especially during really hard economic times and during the war. It’s a viable art that we should embrace because all of our comedy stems from it: the Carol Burnett show, Saturday Night Live, Lady Gaga is burlesque, Katy Perry is burlesque. These things that we have today all come from that era.

Is there still a thriving burlesque community today?
It’s getting bigger, but I believe that burlesque shows today are mostly stripping. I think there are some comedy acts, but it’s not like what a burlesque show was. You’re not going to go to a burlesque show now and see thirty chorus girls. But they have really kept an interest in these women alive, and I think they honor them. They get really into making their costumes and making an act and their makeup, but it’s different because it’s their choice to do this. This is what they want to do, and it’s a hobby. [Before], the girls worked really, really hard.

How would you compare the American burlesque scene to the European burlesque scene?
There wasn’t a European burlesque scene, not back then. It’s a very American art form that originated in New York. In Paris in the ‘20s, and on Broadway, too, you could go to a show and see nude women, but they did not take off their clothes—they did not strip. So that’s what America did: We invented the strip. There are different theories about who started it when—a strap broke and got a big applause, or a performer’s cuffs were dirty so she took those off and that got applause. There are all of these urban legends surrounding when stripping’s beginnings, but it was around the late teens or ’20s when it first became popular. For my second book I’ll be focusing on one stripper in particular, Lili St. Cyr. She was Los Angeles based, and hugely, hugely famous in the ’50s. I’m going to try to finish it up this summer.