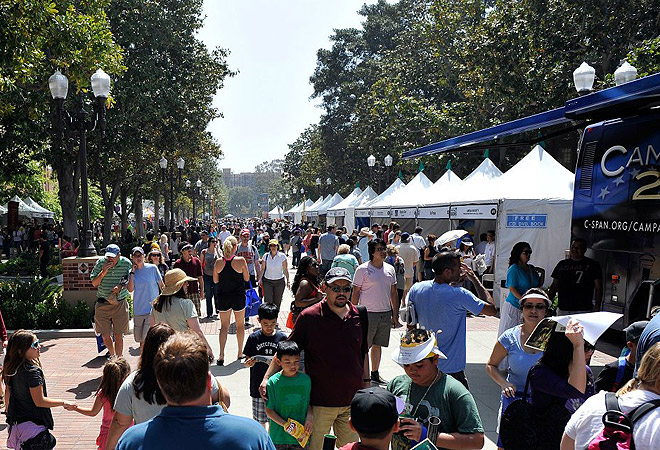 The annual Los Angeles Times Festival of Books can be a daunting affair: large crowds, hundreds of booths, countless panels, discussions, and concerts. It’s tough deciding which events to attend. We asked five local authors, all of whom will be appearing at the festival, which events they want to catch this weekend. Facing too many options? Take a page out of their books.

“Quel buffet, right? Look, it goes without saying, but I’ll say it anyway: if I could hear Samantha Dunn with Meghan O’ Rourke, Emily Rapp, and Rebecca Solnit—Memoir: Close to the Bone (Saturday at 1:30)—I would. And here’s my Sunday dilemma, somebody help me: The Culture of Culture, moderated by David Ulin—with Tom Bissell! And Pico Iyer! And D. T. Max!—is scheduled at exactly the same time as Living and Writing Los Angeles (where I happen to live and write), with Brighde Mullins at the helm. And at 3:00? Though I’m keen to see if Tod Goldberg can behave himself (secretly hoping he can’t or won’t), with Laila Lalami, Hector Tobar, and Nina Revoyr (Fiction: Unheard Stories), there’s a bluegrass event on the Pop and Hiss stage…”

“As always, I’m resigned to missing most of what I’d like to see. If I can get myself over there on Saturday, I’ll try to catch the panel with Nalo Hopkinson (Dysfunction Junction, it’s called), whose new novel I’m excited to read. Laura Pulido’s “A People’s Guide to Los Angeles” was one of the inspirations for the “Invisible L.A.” series I’m doing for Los Angeles magazine, and I definitely plan to be at her panel (Living and Writing Los Angeles) on Sunday. I’m also excited to see Harry Gamboa that afternoon–Steve Lopez moderates the panel, which is called Steve Lopez and the Song for L.A., so as far as I know, the panelists will be discussing Steve Lopez, and singing.”

“For me, the Los Angeles Times Festival of Books is like old home week, rich with great writers whom I also selfishly count as my friends. And, rather than being East Coast cadaverous and competitive, many of us writers sincerely like each other. Here are a few ladies on the schedule whom I consider some of the stylistic literary “Wild Girl Writers of L.A.”: Amy Alkon, Samantha Dunn, Celeste Fremon, and Rachel Resnick. Quirky geniuses in attendance: Denise Hamilton, MG Lord and Deanne Stillman. They will always stimulate your mind, as will recent California Poet Laureate Carol Muske-Dukes. Oprah Book Club authors Janet Fitch, Mona Simpson and Cristina Schwarz are brilliant writers, truly outstanding people AND mothers (how many of us wish to fulfill at least two of those three categories). I should throw in some men! Gustavo Arellano and Ron Koertge always have me in stitches. Leo Braudy has perenially thought-provoking takes on culture. In the end, because I’ve taken my girls to the festival so many times, my heart remains with Genevieve of Disney Junior’s Choo Choo Soul (Sunday, 10 a.m.). Genevieve is like touching a ray of sunshine, and I mean it sincerely (we are in California after all).”

“Well, that’s a tough question, because the festival is like a cross between Christmas and high school reunion for writers, the thing we L.A. lit types wait for all year long so we can catch up with friends and meet some new ones. Plus, just totally geek out on books. But, OK, since you asked…among the things I’m hoping to see is Why Did the Writer Cross the Genre? with the dream team of Dinah Lenney, Luis Alfaro, Bernard Cooper and Sandra Tsing Loh. I’m also hoping to see poet Henri Cole read on stage, hear Margaret Atwood in conversation with Michael Silverblatt (even though I am not smart enough to know what he’s talking about half the time), catch the non-fiction panel on violence with Deanne Stillman, and see Hector Tobar talk to Jamaica Kincaid.”

“I am a severe decision-cripple, so the Festival of Books is a source of anguish: Many terrific panels are scheduled at the same time. For example, four of the events to which I was most looking forward are all taking place at 11 a.m. on Saturday. One is Publishing from Soup to Nuts with Bonnie Nadel, the brilliant L.A.-based Literary agent, and Robert Weil, who has edited many of W.W. Norton’s most impressive titles. Competing with this is a conversation between novelist Margaret Atwood and radio interlocutor Michael Silverblatt. They are in turn pitted against Fiction: Cultural Coming of Age with ever-beguiling writers Janet Fitch, Ben Fountain and Lauren Groff. The panel is moderated by Laurie Muchnick, the new NBCC president and an old friend from my salad days in Manhattan. But that’s not all! Also at 11 a.m. is Science: Behave Yourself moderated by the always sparkling Jennifer Ouellette. Fortunately Fiction: Fantastical Visions moderated by Brighde Mullins is on SUNDAY at 11 a.m. If I have any energy left on Saturday afternoon, I hope to hear Danica McKellar, the actor and mathematician. Likewise, if I have not collapsed by Sunday afternoon, I will listen to Judith Freeman interview, among others, novelist Mona Simpson, about problematic mothers in fiction.”

For more information on the events at this weekend’s Festival of Books, take a look at the program schedule.

Akilah Hughes Used Social Media to Make a Name for Herself. Now She Uses It for Social Change